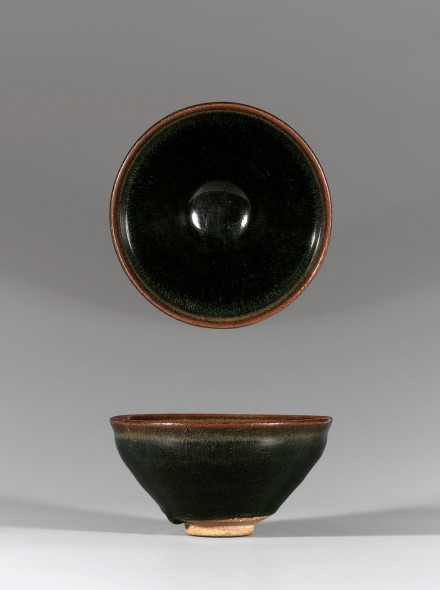 with a very dark brown-black glaze suffused with a delicate pattern of yellowish-brown ‘hare’s fur’ glaze highlights cascading down from the rim on the interior and exterior, shading paler and showing an undercurrent of lavender lower down on the sides, with well potted thick sides rising from a small circular foot with very shallow footrim, the wide mouth with a lightly indented ‘finger groove’ on the exterior below the tapered lip with rust-brown edge, the glaze very well controlled, ending neatly around a shallow angle cut low on the exterior, the exposed body clay around the foot fired dark purplish-brown, the inset base incised with two characters which may be read as “gongyu” (供御), which may be translated as “Imperial tribute.”

A similar Jianyao tea bowl with ‘hare’s fur’ glaze and gongyu inscription in the collection of the Harvard University Art Museums is illustrated by Mowry, Hare’s Fur, Tortoiseshell, and Partridge Feathers: Chinese Brown- and Black-Glazed Ceramics, 400-1400, Cambridge, 1996, p. 204, no. 76 with an extensive discussion of the category, pp. 204-209, where the author cites similar gongyu-marked Jianyao tea bowls in the Freer Gallery of Art, Washington D.C. (unpublished), and in the Meiyintang Collection, illustrated by Krahl, Chinese Ceramics from the Meiyintang Collection, Volume One, London, 1994, p. 285, no. 529.

Mowry cites Song literary and historical evidence for the fact that Jianyao tea bowls were highly prized at the imperial court and famous throughout China during the Northern Song dynasty, and mentions that the great aesthete and connoisseur Emperor Huizong (r. 1100-1125) was “… an enthusiastic devotee… of Jian tea bowls… as evinced by the laudatory comments in his Daguan chalun [A discourse on Tea in the Daguan Era] of 1107.”

A pottery sherd from a Jianyao tea bowl with gongyu mark discovered at the Jian kilns in Fujian province in 1935 is illustrated by Plumer, Temmoku: A Study of the Ware of Chien, Tokyo, 1972, pl. 50; and other excavated gongyu-marked examples are published in the catalogue of the special exhibition at the MOA Museum entitled Karamono temmoku: Fukken-shō ken’yō shutsudo temmoku to Nihon densei no temmoku, tokubetsuten, (Temmoku Tea Wares: Temmoku Excavated from the Jian Kilns in Fujian Province and Temmoku in Japanese Private Collections, A Special Exhibition), Atami, 1994, pp. 60-61, nos. 40, 41 and 46. For further discussion of archaeological evidence of gongyu-marked Jianyao tea bowls, see Zeng Fan, ‘Wenbo jianxun: “Jianzhan” de xin faxian’ (Cultural and Museum News: A New Find Concerning ‘Jian Tea Bowls’), Wenwu, 1990, No.10, p. 96, where the author suggests that the peak production period for the gongyu-marked Jianyao tea bowls was between A.D. 1112-1170.