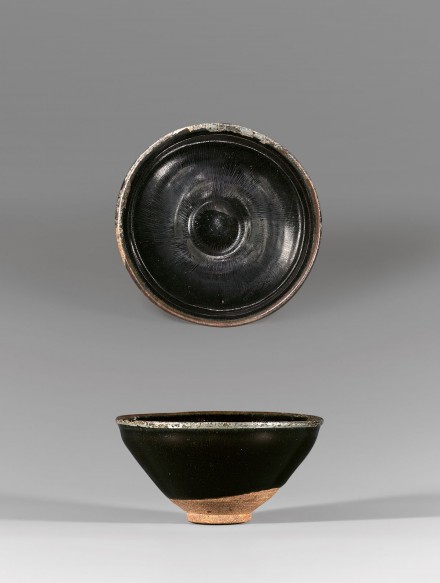 the well-potted flat sides flaring out from a small foot to a tapered rim, with an indented ‘finger groove’ below the everted lip, and with remains of a silver foil mount over the edge of the lip, covered inside and out with a glossy black glaze, with a dense dynamic pattern of ‘hare’s fur’ lines painted in silver filling the sides, leaving only the small concave floor at the center of the bowl unpainted, the glaze on the exterior left plain, ending around a knife-pared angle low on the sides, the exposed body clay fired reddish tan.

Illustrated by K.Y. Ng, ‘Song Dynasty Black-Glazed Tea Bowls from the Yulinting Kilns at Mount Wuyi,’ Kaikodo Journal XXIV, Spring 2008, p. 254, fig. 10 and p. 258, fig. 21, where the author discusses the Yulinting kiln, located at Xingcunzhen, Wuyishan, Fujian province, which has been shown by archaeologists to have been producing tea wares from the latter half of the Northern Song through the middle of the Southern Song period, as one source of this rare type of Song tea bowl with decoration painted in gold and silver over the glaze.

A black-glazed tea bowl with painted decoration in gold, attributed to the kilns at Shuiji, Jianyang, Fujian is illustrated by Mowry, Hare’s Fur, Tortoiseshell, and Partridge Feathers: Chinese Brown- and Black-Glazed Ceramics, 400-1400, Cambridge, 1996, pp. 224-225, no. 86, with a discussion of the technique and references to another example in a Japanese collection, published by Koyama, Toji taikei 38: Temmoku (A Survey of Ceramics Series 38: Temmoku Wares), Tokyo, 1974, pls. 28-29.