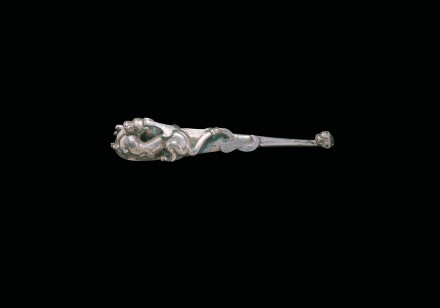 5.
AN INLAID SILVER GARMENT HOOK CAST
WITH A MYTHICAL BEAST

the auspicious mythical xiangrui cast in high rounded relief, with the head of a horse, feline body, bifurcated horn, and double-scroll tail, its body elongated and twisted to fit the shaft, with chest thrust forward and head held high, the eyes inlaid in jet, the tapered neck at the opposite end with terminal in the form of a dragon’s head turned back to form the hook, the dragon’s eyes also inlaid in jet, the underside with a stud for attachment, showing scattered malachite green encrustation in the recesses.

A very similar cast silver garment hook with remains of gold foil inlays but lacking the original dragon-head hook in the Miho Museum is illustrated in the inaugural exhibition catalogue Miho Museum—South Wing, Shigaraki, 1997, p. 206, no. 103.

5.
AN INLAID SILVER GARMENT HOOK CAST
WITH A MYTHICAL BEAST