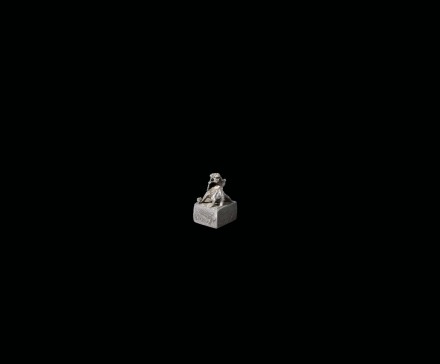 cast with a striding figure of a bixie on top of a solid square block, the mythical beast intricately modelled with the body of a tiger, the head with a pair of elongated horns, the shoulders with wings, tufts of fur at the cheeks and a long beard, shown with its body powerfully tensed, head pulled back and mouth open revealing rows of teeth, the surface unevenly oxidized to cloudy gray, the base with four seal characters cast in intaglio.

The seal may be read as ting □ yin xin (桯□印信), which may be translated as “Ting □, his seal,” indicating that this was a personal seal, not the seal of a magistrate or a general. The second character, indicating the given name, is indecipherable.

The bixie, an auspicious mythical beast in Chinese mythology said to have the power to ward off evil, was a popular subject in the Han dynasty and many Han seals with bixie knops are recorded, but cast silver seals surviving from the Han period are rare.