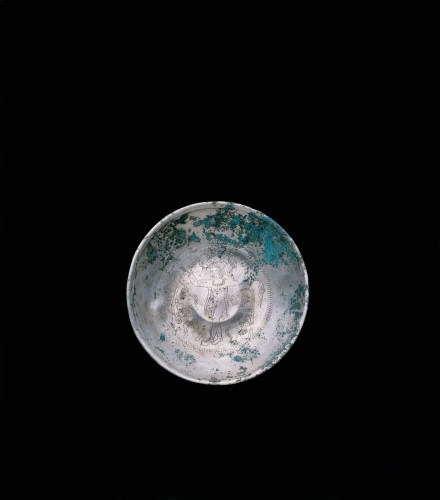 the shallow circular bowl formed by hammering over a mould, with thick half-round lip around the rim, decorated on the interior with an incised roundel of a tall female figure with elaborately dressed hair but wearing only a necklace and a cape, shown standing under an arch formed by a fruiting grapevine and holding the vine with both hands, as if bending it down to assist a much smaller figure with curly hair, shown grasping the lowered end of the vine, harvesting the grapes, all enclosed within a medallion formed by an incised herringbone border, the underside plain and raised on a high ring foot with splayed sides which is inset over a mushroom-shaped knob at the base of the cup.

The imagery on this wine cup derives from a popular motif seen on silver and other luxury goods from Sasanian Persia. The style of execution and form of the cup indicate that it was most likely made in Sogdiana, a Central Asian Kingdom populated by an Eastern Iranian people settled in territories roughly corresponding to the modern provinces of Samarkand and Bokhara in modern Uzbekistan.

The Sogdians occupied a key position on the ancient Silk Road and Sogdian traders dominated the caravan routes of Central Asia. Luxury goods brought to China by Sogdian traders included silver and gold vessels and jewelry, grapes and wine as well as Buddhist images, glass, coral, and amber.

A Sasanian gold ring set with an onyx seal carved with a standing female figure in the same dancing pose, holding a long scarf in an arch over her head, discovered in the tomb of the Chinese official Li Xian (d. 569) at Guyuan, Ningxia province, on the Northwestern frontier of China is illustrated by Juliano and Lerner in Monks and Merchants: Silk Road Treasures from Northwest China, Gansu and Ningxia Provinces, 4th-7th Century, New York, 2001, p. 101, no. 32. The authors note that the same imagery is found on Sasanian luxury metalwork, citing and illustrating as an example a Sasanian silver dish in the Cleveland Museum of Art decorated in relief with a nude female shown dancing with her scarf arched over her head, with the trailing ends of her scarf transformed into luxuriant curling grapevines on either side, commenting: “If this figure is not intended to represent the great Sasanian goddess of water and fertility, Anahita, or a priestess of her cult, then it is certainly meant to evoke more generalized ideas of fecundity and abundance.”