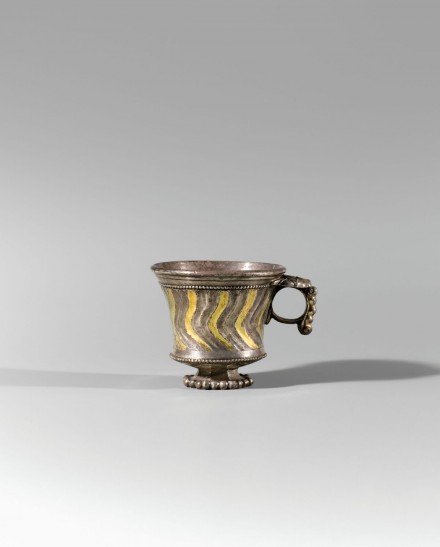 with heavily cast waisted sides decorated with a broad frieze of concave serpentine flutes alternately gilded and left plain, framed by beaded borders at the edge of the base and below the flared rim and moulded with a half-round lip above stepped plain bands on the exterior, the rounded base of the cup chased with a continuous band of foliate scroll picked out in gilding on a ring-punched ground, raised on a faceted octagonal foot with splayed edge ornamented with a border of large beading which is repeated on the outer edge of the small ring handle applied pendicular to the side of the cup below a thick tab cast with a pair of addorsed elephant heads ornamenting the thumb-rest just below the mouth rim, the elephants’ ears and the beaded band at the edge of the handle also parcel-gilt.

Qi, ‘The Hejiacun Treasure and Sogdian Culture,’ in Les Sogdiens en Chine by De la Vaissière and Trombert (eds.), Paris, 2005, p. 110 and as a line drawing in fig. 8. The same line drawing was previously illustrated by Qi in Tang dai jinyinqi yanjiu (Research on Tang Gold and Silver), Beijing, 1999, p. 346, fig. 3-38, no. 2, where the author suggests a mid-7th century dating.

Compare the octagonal gilt bronze cup with musicians cast in high relief, similarly decorated with small punched rings on the border of each panel, and with large beading on the ring handle and the edge of the octagonal foot, illustrated in Hua wu da Tang chun: Hejiacun yibao jingcui (Selected Treasures from Hejiacun Tang Hoard), Beijing, 2003, pp. 74-79, no. 4, where the author describes the cup as heavily cast, carved, and gilded, and suggests that the cup was probably made in China by Sogdian craftsmen during the mid-7th to early 8th century.