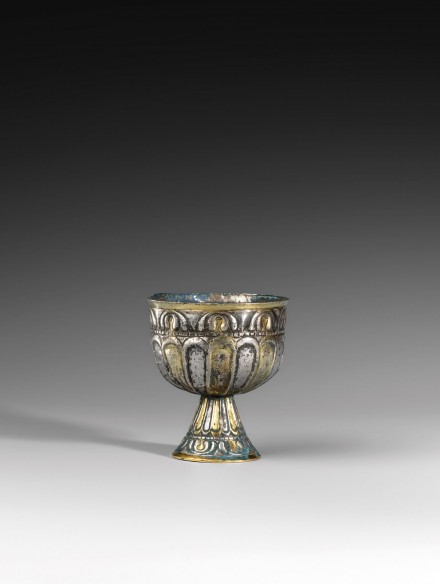 the deep bowl decorated with sixteen petal-flutes with half-round raised borders radiating up from the base of the bowl to a narrow band of squared beads and a border of pairs of inverted horizontal ‘C’-scroll motifs in relief below the slightly flaring lip, and with the same fluting and decorative borders repeated in reverse on the sloping sides of the tall hollow foot and around the spreading base, the recessed areas of the decoration and the rim of the bowl and the footrim all gilded, the interior with a small medallion enclosing a florette with eight gilded petals, the surface with lightly encrusted green patination from burial.

No other relief-decorated silver stemcup of this distinctive design appears to have been previously recorded, but two small plain stemcups of similar form, regarded by Chinese scholars as foreign luxury goods imported into China from Mongolia or Central Asia, one gold and the other silver, were discovered in Xi’an, Shaanxi province, in the tomb of the Sui dynasty princess Li Jingxun who died in A.D. 608. The gold stemcup is illustrated by Watt in China: Dawn of a Golden Age, 200-750 AD, New York, 2004, p. 294, no. 186, and both stemcups are illustrated in Tang Chang’an cheng jiao Sui Tang mu (Excavations of the Sui and Tang Tombs at Xi’an), Beijing, 1980, pl. XI, fig.s 1 and 8.

A plain gold stemcup of similar form and slightly larger than the present example, included in an exhibition from China which toured Japan, is illustrated in the catalogue Chūgoku Naimōko—hoppō kiba minzoku bunbutsu ten (Chinese Inner Mongolia—Art of the Horseman of the North), Tokyo, 1983, p. 70, no. 68, attributed to the Tang dynasty.

The ‘C’-shaped motifs in rounded relief on this stemcup are closely related to the relief designs on an Iranian silver vase in the collection of the Metropolitan Museum of Art, illustrated by Demange in Glass, Gilding, & Grand Design: Art of Sasanian Iran (224-642), New York, 2007, p. 45, no. 12, attributed to the 8th Century.

Most scholars accept the traditional view that the stemcup vessel form was introduced to China by ‘Silk Route’ traders bringing stemcups from Sasanian Iran or Sogdiana, as outlined by Qi in Tang dai jinyinqi yanjiu (Research on Tang Gold and Silver), Beijing, 1999, p. 408, but the Japanese scholar Kuwayama Shōshin, quoted by Qi, loc. cit., has proposed an alternative source in ‘A Chronology of Tang Gold and Silver Excavated since 1956,’ Shilin, Vol. 61, No. 6, 1977, noting that stemcups were a prevalent form in Byzantium in the 4th-5th century, and Byzantine stemcups also may have been brought to China by ‘Silk Route’ traders. A Byzantine gold stemcup decorated with elongated petal-flutes similar to those found on the present example, excavated in 1912 from a 7th century hoard in the Steppe region north of the Black Sea, now in the Hermitage Museum, illustrated in the catalogue of the travelling exhibition organized by the Tokyo National Museum, Cultural Contacts between East and West in Antiquity and Middle Ages from USSR, Tokyo, 1985, no. 146, may give some support to Kuwayama’s conjecture.