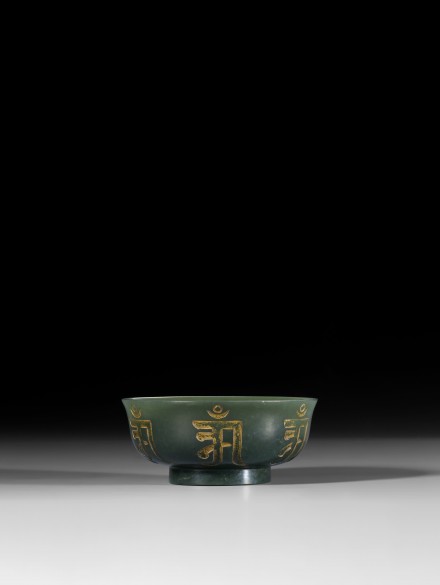 following a Tibetan Buddhist ritual form, with shallow rounded sides carved on the exterior with the Lantsa character aum repeated six times, each character deeply recessed and filled in with gilding, the translucent leaf-green nephrite of even tone throughout.

This type of bowl, called a jing shui wan or ‘pure water bowl’, was used in Tibet during the Butter Lamp Festival when yak butter lamps are lit and pure water bowls are placed in temples and shrines to commemorate the death of Tsongkhapa, the great philosopher and teacher around whom the Gelug School of Tibetan Buddhism was formed in the 15th century.

“Aum” is used as the first character in many Buddhist mantras including the popular mantra of Avalokitesvara, the Bodhisattva of Compassion “Aum mani padme hum.”

The Qianlong emperor, an ardent devotee of Tibetan Buddhism, erected several Tibetan Buddhist temples in Beijing and commissioned large quantities of implements and vessels for ritual use and as gifts to visiting Tibetan lamas.