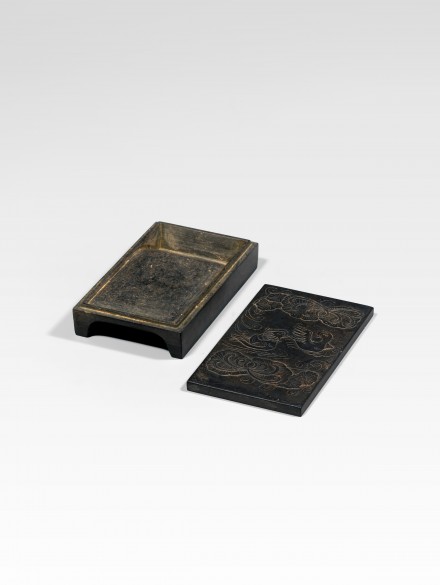 4.
A ‘DUCKS AND LOTUS’ SHE INKSTONE AND COVER

of rectangular sizhi yang form, carved from smooth dark gray she stone, the grinding surface sloping abruptly down to form an angled water well at one end, with a squared and inset lip all around the rim to receive the close-fitted flat cover carved in shallow relief with a pair of Mandarin ducks swimming between large stylized lily pads in a tranquil pond.

A two-tier she inkstone of very similar form carved on the flat cover with a similar scene of a pair of Mandarin ducks in a lotus pond was exhibited at the National Museum of History in Taipei and illustrated in the exhibition catalogue titled Hanhai cangzhen: Zhonghua wenwu xuehui 30 zhounian ji’nian zhan (Treasures of the Chinese Culture and Fine Arts Association: The 30th Anniversary Exhibition), Taipei, 2009, p. 146.

Compare the covered inkstone of similar form carved in shallow relief with stylized flowers and foliage on the flat cover, excavated from a Northern Song tomb at Macheng, Hubei, illustrated in Kaogu, 1965, No. 1, pl. 5, fig. 10.

4.
A ‘DUCKS AND LOTUS’ SHE INKSTONE AND COVER