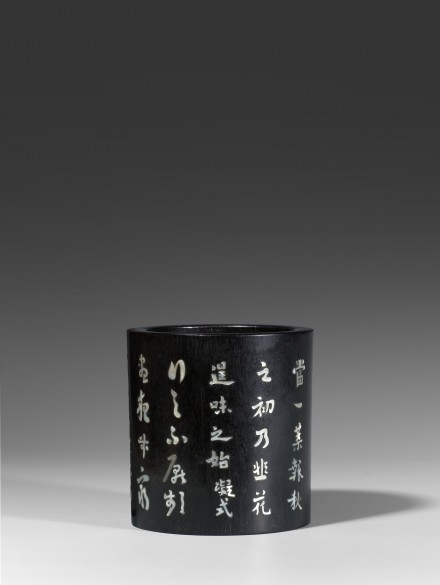 of cylindrical form with thick straight sides rising to a very gently rounded rim, inlaid in mother-of-pearl with two poetic inscriptions in running script followed by the signature Shi’an and a blank seal.

行之不厭煩 Never grow tired by frequency of practice
晝夜無窮數 through days and nights without number.
歲久積功成 For only after long years of accumulated success
漸入神仙路 does one gradually enter the path of immortality.

Both inscriptions refer to the art of calligraphy, observing that only after much time and effort – when one reaches the autumn of life – can one’s art attain immortal excellence, characterized by rich flavor, as the Chinese flowering chive plant becomes powerfully aromatic only in the autumn.

Liu Yong was a high official and a calligrapher renowned for his interpretations of Jin, Tang, and Song calligraphic styles. Although both inscriptions on the present example are excerpts from poems by Yang Ningshi, only the first is based on Yang’s hand; the second is Liu Yong’s own style.