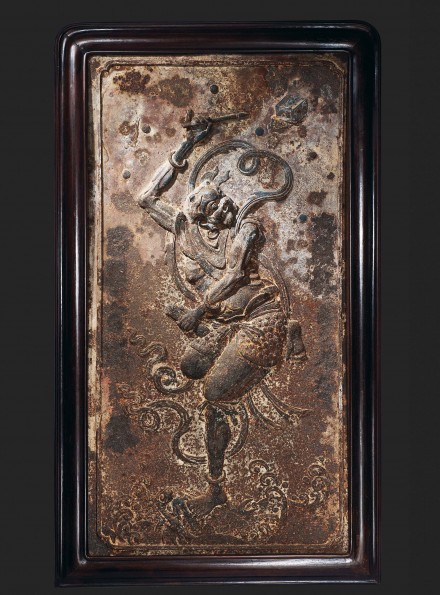 the demon star-god shown standing on a dragon-fish above frothing waves, holding a small scroll in his left hand and a writing brush in his right hand, gazing up at a bushel measure and surrounded by small bosses representing a constellation of stars, cast in varied relief within a raised border, hongmu frame.

The complex derivation of the iconography of Kui Xing is succinctly described by Gillman in Chinese Ivories from the Shang to the Qing, O.C.S., London, 1984, p. 100, as follows: “The image of Kui Xing is a collation drawn from several aspects of the Chinese experience, star-mysticism and astronomy, the twilight world of imps and demons, respect for the written character and the fondness for punning.  The character kui is the name of an asterism in the Northern Dipper and is made up of the character for demon (gui) and for a dipper, or bushel measure (dou).  The gui character has at its lower right an element which curves upwards: the Kui Xing image is therefore a pictorial pun of a demon with its right leg kicking upwards, a bushel measure in one hand.  The kui asterism is twinned with Wen Chang, and is also seen as a literary man’s stellar correspondence.  The stellar god Kui Xing, despite having such a grotesque appearance, appeared beside Wen Chang in temples and was also worshipped for success in examinations.  In his right hand he holds a writing brush, and he rides upon a dragon-carp, itself alluding to the myth that the carp who leap the Dragon Gate Falls in Henan Province are transformed into dragons, an allegory for successful civil service candidates.”