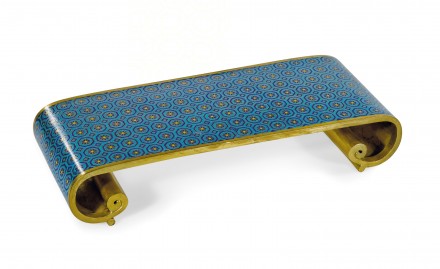 cast in bronze and enamelled with a formal floral diaper pattern imitating silk brocade, the rows of yellow-centered blue florettes in cells interspersed with lozenge motifs, all outlined in gilded wires on a turquoise-blue ground, the underside, curled ends and border all richly gilded.

Compare the cloisonné enamel scroll-form stand from the Sedgwick collection illustrated in the catalogue of the Oriental Ceramic Society exhibition, Arts of the Ming Dynasty, London, 1957, no. 331, described as an armrest.  The same example of this rare form is illustrated by Garner, Chinese and Japanese Cloisonné Enamels, London, 2nd ed., 1970, pl. 57, and by Brinker and Lutz, Chinese Cloisonné: The Pierre Uldry Collection, New York, 1989, no. 174.

A lacquer stand of very similar form, decorated with flowers on a similar formal diaper ground and bearing a Kangxi reign mark, is illustrated by Lee, Oriental Lacquer Art, Tokyo, 1972, p. 207, pl. 142, where the author states “…this type of work was very popular during K’ang Hsi’s reign and was made at the imperial workshop under the supervision of Liu Yuan.”