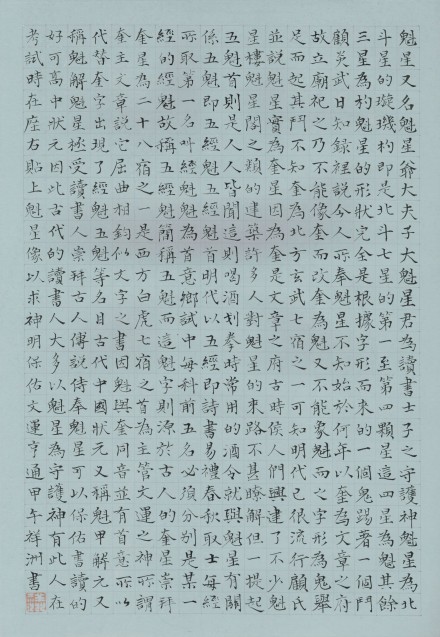 Tai Xiangzhou’s kaishu calligraphy is a commentary on the titles, imagery and traditional practices associated with Kui Xing, the deity known as the Guardian of Scholars. Several ritual titles are quoted and the origin of his name kui (魁), pronounced the same as the ancient character for literature (奎), combined with his place in the night sky, associated with the Big Dipper and the North Star (璇璣), are cited as the basis for his image as a dancing humpbacked demon. Kui Xing’s close connection with the annual imperial examinations, when the success or failure of every aspiring Chinese scholar’s career was determined, is illustrated by the custom of referring to the Five Classics of Confucian Literature as the “Wu Kui” and naming an examination champion in each of the five categories as the “Kui”. In the Ming period some scholars even brought small votive figures of Kui Xing to place on the desk during imperial exams.