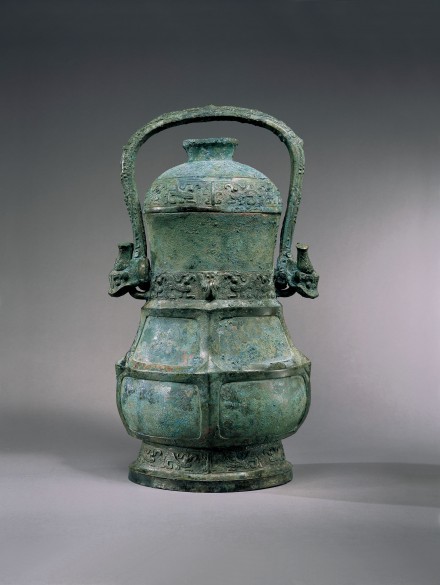 8.
AN ARCHAIC BRONZE WINE VESSEL AND COVER (YOU)

of pear shape and elliptical cross section, the lower body divided into quarters on both sides by raised angular bands embellished with diamond-shaped bosses at the intersections, beneath a frieze of crested birds with long tails cast in relief on a leiwen ground and arranged in pairs confronting a monster mask at the base of the neck, the vertical foot decorated with a very similar frieze centered by a flange and reduced taotie motif, the domed cover cast with a matching frieze of birds around the rim and surmounted by a cup-shaped finial pierced with a small aperture at either end and rising to a galleried edge which echoes the edge of the foot of the vessel, the arched swing handle cast on the top with elongated cicadas with hooked-scroll bodies and curled feelers in relief on a leiwen ground interspersed with three diamond-shaped bosses, the terminals of the handle in the form of bottle-horned dragon heads cast over vertical lugs on the neck of the vessel, the surface with widely scattered dark malachite-green encrustation and brighter mottled blue-green patination overall, the interior base with an inscription of seven characters cast in intaglio.

The inscription may be transcribed as: “x zuo fu ding bao zun yi x” and may be read as: “x made this precious sacred vessel for father Ding.”

A bronze you of closely related form and design, with the same strapwork and diamond-shaped bosses between narrow bands of crested birds from the collection of the Harvard University Art Museums is illustrated by Rawson in Western Zhou Ritual Bronzes from the Arthur M. Sackler Collections, Vol. IIB, Cambridge, 1990, p. 491, fig. 67.3. Another very similar example, published in the catalogue of the International Exhibition of Chinese Art, London, 1935-36, no. 178, listed as from the Tuan Fang Collection, is now in the collection of the Nelson-Atkins Museum of Art, Kansas City, and another similar bronze you of smaller size, from the Collection of J. F. H. Menten, now in the Rietberg Museum, is illustrated by Brinker and Burkart-Bauer in the catalogue of an exhibition at the Baur Foundation, entitled La Chine Archaïque: Bronzes et Jades Du Musée Rietberg-Zurich, Geneva, 1987, p. 41, no. 23.

8.
AN ARCHAIC BRONZE WINE VESSEL AND COVER (YOU)