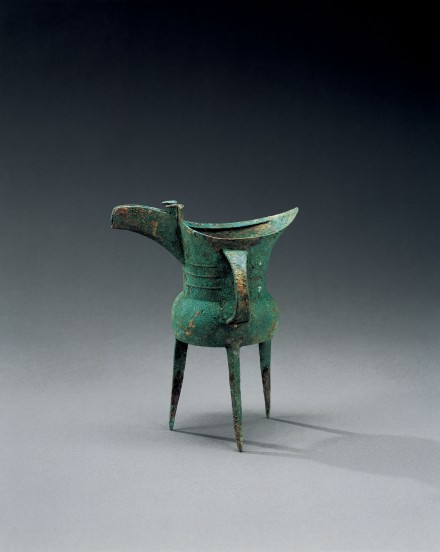 of oval section with three raised lines of 'bowstring' decoration encircling the thinly cast straight sides above a wider, rounded skirt raised on three slender curving blade-shaped legs of triangular section, the narrow gutter-shaped spout decorated with a pair of small posts capped with crescent-shaped finials, the mouth with an extra thickness of metal around the inner rim and rising to a sharp point at the back, with a simple strap handle of slightly waisted form on one side, the metal of smooth dark gray color with attractive bright green encrustation from burial overall and showing scattered remains of buff-colored burial earth.

Another early jue of this type, with the same triple bowstring decoration, from the collection of Dr. Paul Singer, was exhibited at the Asia Society in New York in 1965 and illustrated on p. 36, fig. 6 in the catalogue Relics of Ancient China, New York, 1965, by Loehr, who discusses the vessel and other similar examples in his chapter on the Shang-Yin period, p. 20ff.  The Singer jue was exhibited again by Fontein and Wu and illustrated in the catalogue Unearthing China's Past, Boston, 1973, p. 35, no. 5 together with a reference to a similar example excavated from burial no. 203 in Zhengzhou, Henan province, illustrated on p. 36, fig. 4.

Compare also the jue of this type decorated with criss-cross lines between the bowstrings, exhibited at the Hong Kong Museum of Art in the catalogue entitled Ancient Chinese and Ordos Bronzes, Hong Kong, 1990, p. 65, no. 1.  Two other examples decorated with simple stylized masks in thread relief are illustrated by Bagley in the introduction to Shang Ritual Bronzes in the Arthur M. Sackler Collections, Washington D.C., 1987, pp. 72 and 75, figs. 24 and 35, where the author suggests in his discussion of the origin and development of Shang bronze casting that the thickness at the rims of these very early vessels might be a continuation of the form of a possible wrought-metal ancestor not yet discovered.