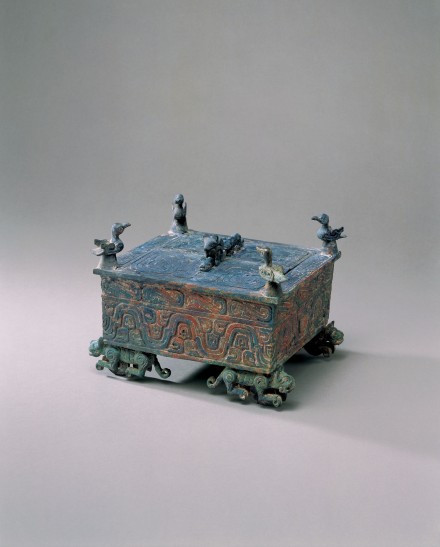 of quadrangular form, raised on the backs of stylized tigers aligned in pairs under the four corners, each tiger cast in the round with its hollow torso concealing a small bronze wheel on a short axle between the forelegs, the flat top of the box projecting over the sides and decorated at the corners with four stylized birds each on a peg loosely held in a short cylindrical base, able to turn freely but not removable, the well-fitted flat cover in the form of a matched pair of doors hinged on integral pins extending into sockets at the corners and cast at the center with a free-standing small tiger on one door, lined up behind a crouching bear on the other door, with a slot between the animals’ legs to receive a squared peg with tiger-head terminal which serves as a locking mechanism, the surface of the doors decorated in shallow flat relief with addorsed pairs of profile dragon heads encircled by scroll motifs, with fine linear detailing, flanked by twin-spiral scroll borders on two sides of the top, the four sides of the box with a matching border of twin-spiral scrolls all around, above the main frieze of undulating scroll bands filled with hooked ‘C’-scrolls and shield-shaped motifs above and below to form a repeating pattern, all in the same flat shallow relief as the decoration on the cover, the base plain, the surface lightly encrusted with an attractive bluish-green patina mottled with reddish cuprite on the sides.