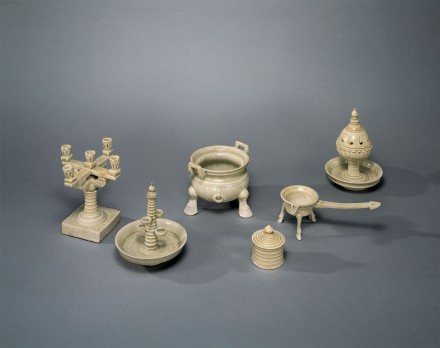 all made from high-fired white pottery covered with a translucent glaze of pale greenish tone, showing scattered remains of gold foil, including a candelabrum of squared form with five sockets, a bronze-form ding censer on tripod horse-leg supports, a pierced lotus-bud form censer on dish support, an oil lamp with rings on a ribbed standard rising to a bud finial, a small ribbed model of a cylindrical covered box with lotus bud finial, a bronze-form pouring vessel with long handle on tripod horse-leg supports, a pair of boots with incised decoration, a pair of slippers with upturned half-round toes, an ovoid pillow with pierced lotus-petal-and-loop ends, a quadrangular model of a wellhead, a small square ladle, an oblong covered box, another smaller oblong covered box with cinnabar red pigment on the interior, a model of a stove with stepped-flange front, a 'C'-shaped armrest on three legs, a low table on corner-bracket supports, possibly a game board, a slotted spool-shaped stool, an incised square weiqi chessboard on corner-bracket supports, a table with turned-up ends raised on splayed slotted supports, a narrow cushion-shaped oblong armrest on trestle supports, a pair of small rectangular tables on slab supports, a block-shaped model of a storehouse on openwork platform base with a small recessed door under the removable “tiled” roof with multiple lotus bud finials, and two models of granaries, each of tall rounded form with incised door above the openwork platform base and fitted with removable high pointed roof with lotus bud finial.

A similar set of green-glazed stoneware tomb furniture including very similar models of candelabrum, censer, armrest, wellhead, stove, boots, slippers, and both types of storehouses, discovered in 1959 at Anyang, Henan province in the tomb of Zhang Sheng, with an epitaph including a cyclical date corresponding to A.D. 595, is illustrated in Kaogu, 1959, No. 10, pls. 12-13, with line drawings on pp. 543-544, where the author suggests that these fine white stoneware models with pale green glaze were produced in Ci county near Anyang at the Jiabi kilns which were famous for this type of ware.

Another set of glazed stoneware miniature models from a Sui Dynasty tomb also discovered at Anyang, Henan province, is illustrated in an excavation report published in Kaogu, 1992, No. 1, pp. 32-45 and p. 79.