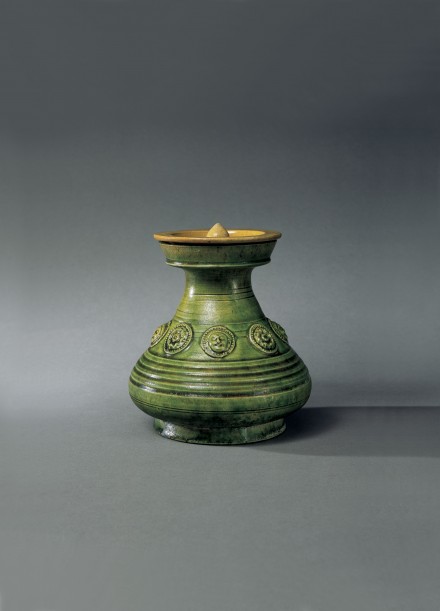 the wide pear-shaped vessel applied on the sloping shoulder with relief-moulded medallions of human faces, each mustachioed regal countenance encircled by a beaded border, alternating with stylized florette medallions within matching beaded borders, forming a frieze above horizontal ribbing on the compressed, rounded sides which curve in sharply at the base, resting on a square-cut wide ring foot with slightly splayed edge, the short neck tapering up to a cup-shaped mouth with moulded edges, the stepped circular cover conforming to the shape of the mouth of the vase and centered with a lotus bud knop, the vase covered all over with a light green glaze which pools to darker green in the recesses, highlighting the decoration, showing widely scattered areas of iridescence from burial, the cover with a thinner and paler glaze of yellowish-green tone, the underside of the cover and the recessed base of the jar left unglazed, showing the pale buff pottery body.

This distinctive vessel form with a broad base and wide mouth first appeared as a silver shape in the Eastern Mediterranean and was introduced to China through ‘Silk Road’ contacts.  It quickly became a popular form in China during the Six Dynasties period.  Many variations of the shape are known in both metal and ceramic versions continuing into the early Tang period, but no other vessel of this form with applied medallions appears to have been previously recorded.

A group of three pottery vessels with applied decoration under a pale green glaze, from the tomb of Lou Rui (d. 570), excavated in 1980 at Taiyuan, Shanxi Province, were shown at the Metropolitan Museum of Art and illustrated by Watt in the catalogue entitled CHINA: Dawn of a Golden Age, 200-750 A.D., New York, 2004, pp. 244-245, nos. 139-141, where the author notes that “… the preference for relief work, whether in stone carving or appliqué on pottery, is generally indicative of Western influence.”

Larger pearl-bordered human face medallions moulded with a very similar visage of a ‘foreigner’ appear on a Northern Qi/Sui dynasty green-glazed pottery vessel acquired by the Metropolitan Museum of Art in 1996, published by Valenstein in “Western Influences on Some 6th-Century Northern Chinese Ceramics,” Oriental Art Magazine, Vol. XLIX, No. 3 (2003/4), pp. 2-11, and in a previous article by the same author entitled “Preliminary Findings on A 6th Century Earthenware Jar,” Oriental Art Magazine, Vol. XLIII, No. 4 (1997/8), pp. 2-13, including detailed documentation of the close similarity of these frontal-human-face-within-pearl-border medallions with moulded pottery appliqué medallions found at Yotkan, an oasis town on the southern branch of the ‘Silk Road’ which was the site of the ancient capital of the kingdom of Khotan, first investigated by Aurel Stein in 1900-01; with an illustration of a very similar Khotanese earthenware human face medallion from Yotkan now in the Hermitage Museum, St. Petersburg, illustrated in fig. 15.