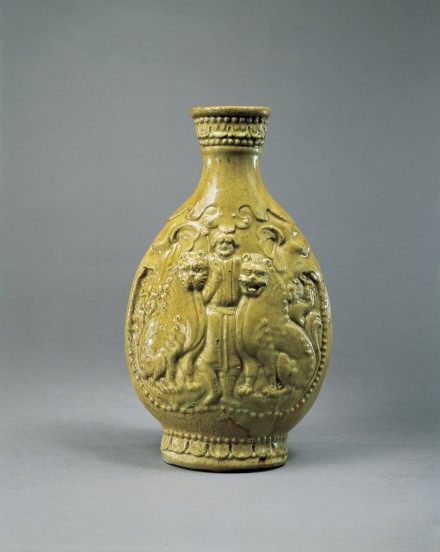 4.
A GLAZED POTTERY FLASK MOULDED WITH
'FOREIGNERS' AND LIONS

following the form of a ‘Silk Road’ pilgrim’s bottle, the flattened ovoid bianhu moulded in relief on both sides with a Central Asian lion tamer shown holding a whip over his shoulder, standing between two docile seated lions, and resting his right hand on top of one lion’s head, the narrow sides of the flask moulded with large elephant heads, and with two attendants shown behind the lions feeding the elephants, the shoulders moulded with a raised decorative border ending in petal-lappets dotted with studs to imitate the riveted leather neck of a canteen, tapering up to a small oval mouth encircled by a collar of stylized lotus petals between ‘pearl’ borders, repeated around the edge of the foot, and with another ‘pearl’ border outlining the figural panel, all covered with a glossy glaze of pale greenish-yellow tone continuing over the base.

A glazed pottery flask of this form and design, excavated in a suburb of Taiyuan City, Shanxi province in 1956 was exhibited last year at the Metropolitan Museum of Art and illustrated by Watt in the catalogue entitled CHINA: Dawn of a Golden Age, 200-750 A.D., New York, 2004, p. 250, no. 148 where the authors describe the decoration as an illustration “… of one of the activities of Central Asian entertainers in Taiyuan, the second capital of the Northern Qi: the circus.”

4.
A GLAZED POTTERY FLASK MOULDED WITH
'FOREIGNERS' AND LIONS