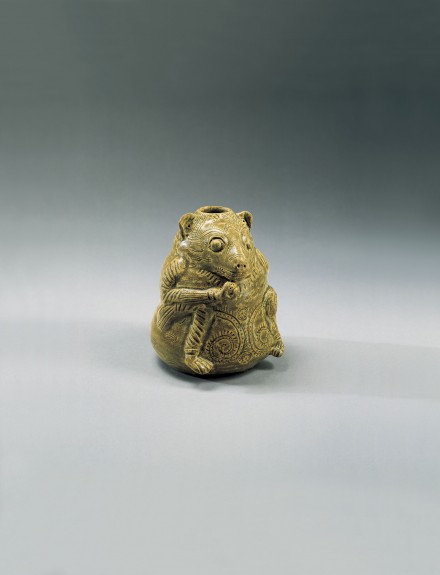 the plump bear shown seated holding a small fruit up to his mouth as if about to take a bite, and with his other paw resting on his knee, the bear’s head shown turned slightly to one side, with pointed snout and large bulging eyes, the top of the head with a rimless opening flanked by small pricked ears, the lower two-thirds of the vessel spreading in two rounded tiers to the wide flat base, freely modeled in relief with the bear’s slender arms and legs, incised with parallel lines on the arms and legs and with feathery spiral scrolls and stellate medallions carved on the belly, the head also with incised stripes and ‘ladder’ bands of ornamentation, the mouth with two neat rows of incised teeth under deeply impressed nostrils, all covered with a slightly degraded olive-green glaze, the base showing five unglazed marks left by kiln supports.

A yueyao vessel in the shape of a seated bear eating a fruit, very similar in form and decoration, but of slightly smaller size and with damage to the crown of the head, discovered in 1966 in a Western Jin tomb in Molingguan, Jiangning, Jiangsu province, now in the Nanjing Museum, was included in the 2005 exhibition at the Metropolitan Museum of Art and illustrated by Watt in the catalogue entitled CHINA: Dawn of a Golden Age, 200-750 A.D., New York, 2004, p. 202, no. 107.   The same piece is illustrated in Jiangsu Liuchao Qingci, Beijing, 1980, figs. 40 and 41, and in the frontispiece color plate.