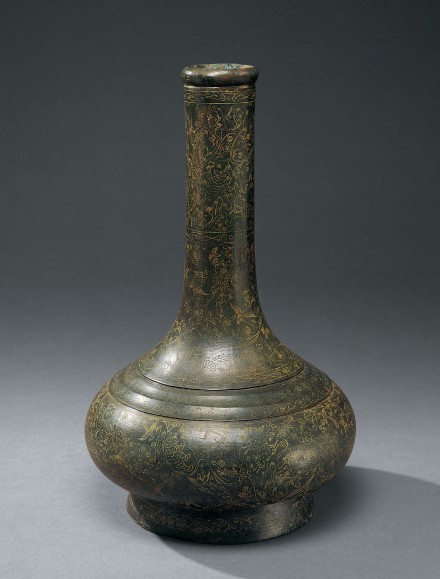 finely decorated all over the bulbous body and tall slender neck with a continuous magical landscape of small rounded peaks with wispy foliage inhabited by tigers, bears, wolves, deer, mountain goats, rabbits, wild boar, immortal ‘sprites’ and fantastic beasts including winged horses, surrounded by elaborate scrolling foliage populated by a wide variety of different birds including geese, cranes and owls, in two wide bands around the neck and filling the rounded sides of the vase, all drawn in a fine linear style with stippled details throughout, between narrow borders of linked scroll motifs framing the decoration on the neck, and with running bands of linked ‘S’ scrolls similar to Vitruvian scroll motif on the fluted shoulders, the flared foot engraved with a different border of twinned scroll motifs and the rounded lip rim left plain, the smooth surface of the bronze with an attractive olive green patina overall and with widely scattered areas of lightly encrusted red and green corrosion and spots of iron-rust encrustation from burial.

The magical rocky landscape populated with a host of animals, birds, fantastic beasts and immortals depicted on this vase corresponds to the description of the mystic realm of the sacred mountains found in the Shanhaijing (Classic of Mountains and Seas), a text of great philosophical influence during the Western Han dynasty.

A vase of similar form but with more deeply carved decoration is illustrated by Fontein and Wu in Unearthing China’s Past, Boston, 1973, p. 119, no. 52, with a detailed discussion of this type of Han bronze with carved and incised decoration including illustrations of related vessels in museum collections and references to Chinese excavation reports documenting the Southern Chinese provenance of the group on pages 118-124.