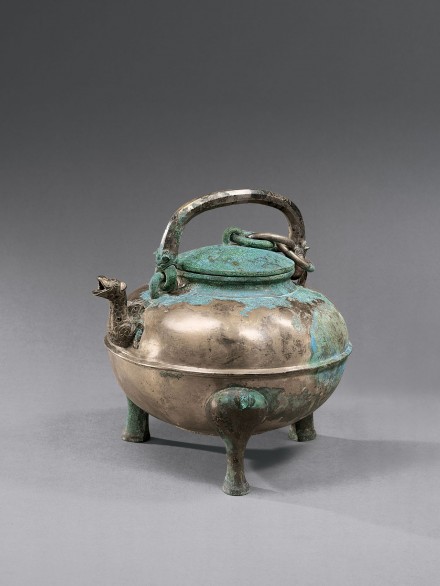 of kettle shape, the plain body of compressed spherical form with a raised angular band around the center and resting on three cabriole legs, the short concave neck with wide everted rim, the close-fitting domed cover joined by a chain of three loose rings to the arched swing handle with faceted sides and terminals in the form of tiger heads each holding in its jaws a thick ring joined to a larger loop on the shoulder of the vessel, and with a projecting spout in the form of a mythical bird emerging at one side with wings displayed and beak wide open, the smooth surface with scattered bright green patination and wide areas of silvery tone showing through uncorroded.

Three similar bronze covered he unearthed in 1974-1978 at Sanjixiang, Pingshan county, Hebei province, from the tomb of King Cuo are illustrated in the excavation report Cuo mu: Zhanguo Zhongshan guo guowang zhi mu (Tomb of Cuo: The King of the Zhongshan State in the Warring States Period), Vol.s I-II, Beijing, 1995, as line drawings on p. 128, pl. 44 in Vol. I and in col. pl. XI, no. 1 and pl. LXXXVI, nos. 1-3 in Vol. II.

Compare also the Warring States bronze covered he of similar form in the collection of Idemitsu Museum of Arts, illustrated in Ancient Chinese Arts in the Idemitsu Collection, Tokyo, 1989, col. pl. 187, with description on p. 215; and a Warring States bronze covered he of related form illustrated by Wang in Chinese Bronzes from the Meiyintang Collection, London, 2009, pp. 52-53, no. 24.