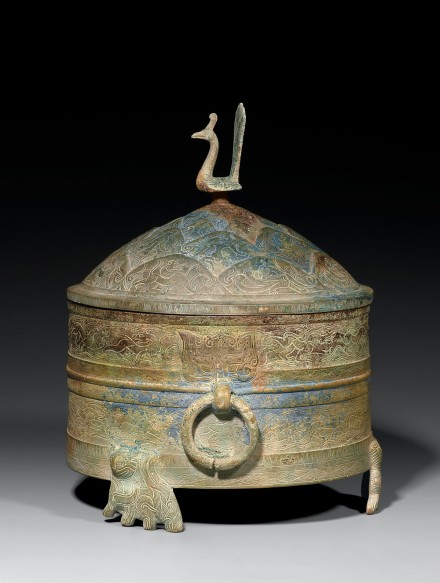 of Southern type, boldly decorated with striding dragons amidst swirling clouds freely engraved in a flowing linear style around the straight cylindrical sides and on the domed mountain-shaped cover, with rows of engraved diamond-shaped designs above and below a half-round band on a wide belt around the center of the vessel, interrupted by a pair of engraved taotie mask and loose-ring handles, and with the same diamond motifs repeated around the edge of the base which is supported on three walking tigers cast in relief with heads turned out, engraved on their flanks with stripes and whorls and showing long claws on their feet, the cover cast with three rows of raised mountain peaks filled with leaping and striding dragons, tigers, birds and wildmen amidst flames and cloud motifs, all freely engraved and with fine stippled and combed details to create a magical setting, the central peak surmounted by a separate finial cast in the form of a peacock standing with wings folded and large fan-shaped tail proudly displayed, the surface with attractive light green patination shading to azurite blue in some areas and showing rust brown on the top of the cover.

Another bronze zun of closely related form and with similar incised decoration but lacking the cover and resting on bear-form tripod supports is in the Palace Museum, Beijing, illustrated in The Complete Collection of Treasures of the Palace Museum: Bronze Articles for Daily Use, Hong Kong, 2007, p. 76, no. 66, described as a vessel for wine. Compare also the bronze zun of this type unearthed in 1988 from Chashanxiang, Pingqiao, Xingyang city, Henan province, illustrated in the catalogue of the special exhibition at the Tokyo National Museum, The Birth of Chinese Civilization, Tokyo, 2010, pp. 122-123, no. 94.

Research on this special group of archaic bronzes with elaborate pictorial decoration incised after casting which were produced in Southern China during the Han dynasty is summarized by Fontein and Wu, Unearthing China’s Past, Boston, 1973, pp. 118-124, with illustrations of examples in museums and American private collections as well as archaeological evidence from Chinese excavation reports.