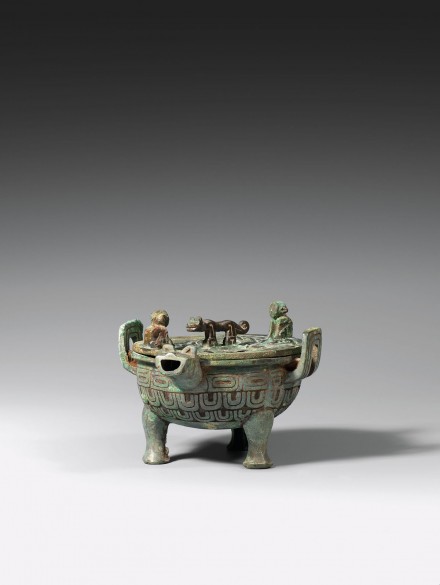 the rounded sides cast in flat relief with two bands of ‘U’-shaped motifs below a collar of ‘D’-shaped motifs under a flat flanged rim interrupted by a short spout in the form of a tiger head and flanked by a pair of upright loop handles echoing the designs around the sides, all raised on three short sturdy legs and with black-inlaid backgrounds highlighting the decoration, the flat cover cast in relief with a pair of symmetrically entwined serpent-dragons with stylized feline heads emerging at opposite sides near the rim, and surmounted by a small handle in the form of a standing tiger in the center and with two crouching monkeys near the rim, flanking the tiger, the underside of the cover with three small feline masks in relief to serve as stops to hold the cover in place, the surface with lightly encrusted malachite green patination.

A bronze covered yi ding of very similar form and decoration, but lacking the tiger handle on the lid, unearthed in 1989 in Shangguo village, Wenxi county, Shanxi province, now in the collection of the Shanxi Institute of Archeology, is illustrated in Shanxi wenwu guancang zhenpin: qingtong qi (Selected Cultural Relics from Local Museums in Shanxi: Bronzes), Taiyuan, p. 53, no. 81, with description on p. 129.

A slightly smaller covered bronze yi ding of this type in the collection of the Shanghai Museum is illustrated by Rawson in the catalogue of the exhibition at the British Museum, Treasures from Shanghai: Ancient Chinese Bronzes and Jades, London, 2009, p. 102, no. 36.; the same yi ding is also illustrated by Chen in Xia Shang Zhou qingtongqi yanjiu: Dong Zhou, shang (Study of Bronzes from the Xia, Shang, and Zhou Dynasties: Eastern Zhou I), Shanghai, 2004, pp. 32-33, no. 445.

Another similar example of this rare form of spouted ding with cover was excavated at Houma, Shanxi province in 1961 and is illustrated in Historical Relics Unearthed in New China, Beijing, 1972, no. 65; in Zhongguo diaosushi tulu (Historical Record of Chinese Sculpture), Vol. I, Shanghai, 1983, no. 82; in Zhongguo qingtongqi quanji: Dong Zhou, II (Compendium of Chinese Bronzes: Eastern Zhou, II), Vol. 8, Beijing, 1995, p. 12, no. 13; and again in Zhongguo gu qingtongqi xuan (Selections of Ancient Chinese Bronzes), Beijing, 1976, no. 49, where it is described as possibly a vessel for mixing sauce.