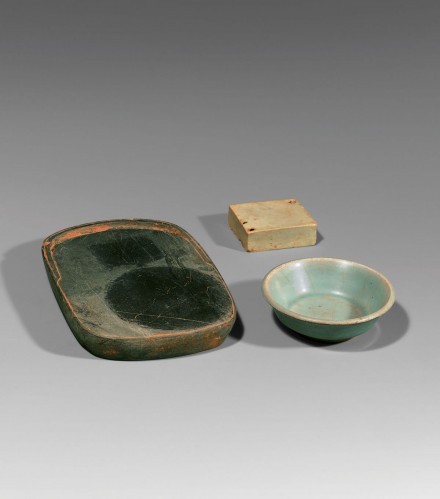 including a Longquan celadon brushwasher with flat flaring sides, lipped rim and angled base raised on a wide ring foot; a Qingbai porcelain waterdropper of hollow block shape, pierced with small apertures at diagonally opposite corners, covered with a very pale bluish glaze, the base unglazed; and a dark gray she inkstone of thick quadrangular slab form with rounded corners, simply carved with linear borders and a deep narrow water well at one end, incised at the base with two characters in seal script “qiao gu” (樵谷) which may be a studio name or hall name, the three pieces all showing remains of red-ochre clay and staining, the top of the inkstone showing the ‘ghost’ of the placement of the waterdropper and brushwasher during burial.

A small Longquan celadon brushwasher of the same form unearthed from the tomb of Madam Han at Zhangshu, Qingjiang, Jiangxi province, dated by epitaph to the first year of Jingding (A.D. 1260), is illustrated by Liu in Dated Ceramics of the Song, Liao and Jin Periods, Beijing, 2004, p. 91, no. 6-13. The same brushwasher is illustrated again in Longquan yao yanjiu (The Research of Longquan Kiln), Beijing, 2011, p. 39, no. 8, described as “a new form that appeared in the Southern Song period.”

Two very similar oval-shaped inkstones excavated in 1953 from a Song dynasty cache at Xiaobeimen, She county, Anhui province, now in the Anhui Provincial Museum, are illustrated in Wenfang zhenpin (Gems of Chinese Writing Instruments), Hong Kong, 1995, pp. 211-213, nos. 10 and 12. Another two similar inkstones excavated in 1974 at Quzhou, Zhejiang province, from the tomb of Shi Shengzu and his wife, dated by epitaph to the tenth year of Xianchun (A.D. 1274), Zhejiang province, are illustrated in Kaogu, 1983, No. 11, p. 1008, pl. 5 (right).