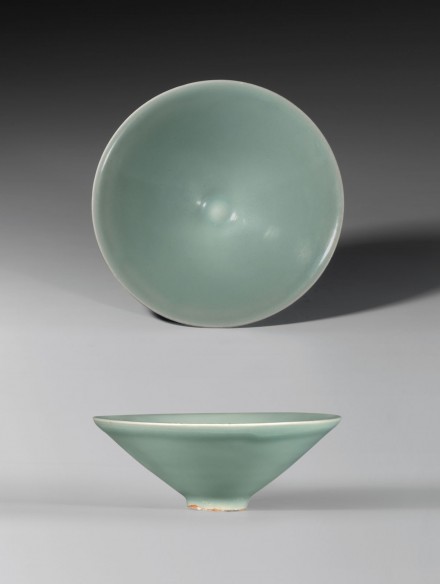 very well potted, with straight flaring sides rising from a small ring foot, covered with a lustrous bluish-green ‘kinuta’ glaze inside and out, pooling thicker around the underside of the rim and in the shallow recess around the small dome in the center of the bowl, the countersunk base also very gently domed and fully glazed, the foot rim unglazed and burnt reddish-brown at the margins.

Other examples are published in Gugong bowuyuan cang wenwu zhenpin quanji (33) Liang song ciqi, xia (The Complete Collection of Treasures of the Palace Museum, Vol. 33, Porcelain of the Song Dynasty II), Hong Kong, 1996, p. 152, no. 137; in the Illustrated Catalogue of Sung Dynasty Porcelain in the National Palace Museum: Lung-ch’üan, Ko Ware and Other Wares, Taipei, 1974, nos. 17 and 18; in the Illustrated Catalogue of Celadon Wares in the Percival David Foundation of Chinese Art, London, Rev. Ed., 1997, no. 231; in the catalogue of the loan exhibition from China shown at the Baur Foundation, Geneva and the Cernuschi Museum, Paris, Céladon: Grès des musées de la province du Zhejiang, Chine, Paris, 2005, p. 179, no. 78, described as a douli wan (hat-shaped bowl); and in the Nezu Museum exhibition catalogue, Nansō no seiji: sora o utsusu utsuwa (Heavenly Blue: Southern Song Celadons), Tokyo, 2010, p. 60, no. 33, from the collection of the Nezu Museum, and p. 61, no. 34, from the collection of Rokuon-ji Temple, Kyoto.