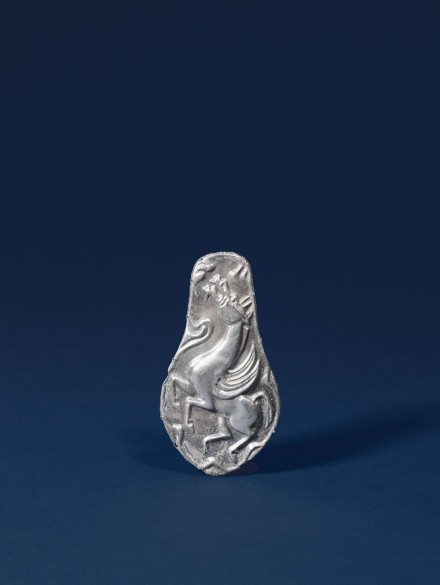 of elongated pear shape, decorated in repoussé with a highly stylized figure of a flying horse with long neck and pointed wings rising from its shoulders, the head with flat cheeks and open mouth, the slender legs ending in sharp hooves gathered under the body as if running at a gallop, enclosed within an irregular border of waves and peaks arising from the edge, the downturned narrow sides with small holes punched through to allow for attachment to the leather harness.

A matching silver plaque with ‘flying horse’ motif in relief, from the collection of E.V. Thaw, was exhibited at the Metropolitan Museum of Art and illustrated by Bunker, Watt and Sun in the catalogue entitled Nomadic Art of the Eastern Eurasian Steppes, New York, 2002, p. 55, no. 22, where the author states that the flying horse, a prominent animal figure in Xianbei mythology, was believed to have guided an early Xianbei leader and his people on their migration to the south. The same silver plaque is illustrated again in the catalogue of the special exhibition shown at the Nara National Museum, Pegasus and the Heavenly Horses: Thundering Hoofs on the Silk Road, Nara, 2008, p. 86, no. 85, with description on p. 247.

A very similar silver ‘flying horse’ plaque of this same type, in the Uldry Collection, was exhibited at the Rietberg Museum, Zurich in 1994 and illustrated in the catalogue Chinesisches Gold und Silber: die Sammlung Pierre Uldry, Zurich, 1994, p. 127, fig. 97.

Compare the gilt bronze plaques with ‘flying horse’ motif in relief, excavated in 1959 from an Eastern Han Xianbei site in Hulunbeierming, Inner Mongolia and illustrated in Zhongguo Meishu Quanji: diaosu bian (Compendium of Chinese Art: Sculptures), Vol. 2, Qin and Han Dynasties, Beijing, 1985, p. 141, no. 140, where they are described on p. 52 as indigenous works of art by the Xianbei.  Compare also the gilt bronze plaques of similar form but decorated with a single-horned mountain goat in relief, excavated from a tomb in Xilin county, Guangxi province, illustrated in Wenwu, 1978, No. 9, p. 45, fig. 3.