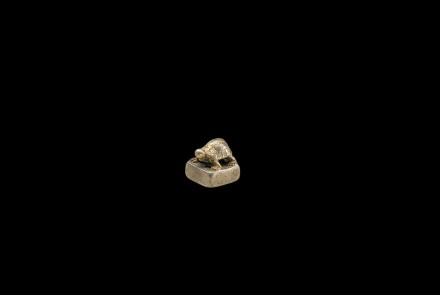 2.
A GILT-SILVER SEAL WITH TORTOISE KNOP

the solid silver square block well cast with a tortoise standing on top with its oversized flipper-feet splayed into the corners, the domed carapace realistically rendered with linear rows of repeating lozenge-shaped segments, the head extended and the short tail touching the block, the worn surface showing traces of gilding in the recesses and on the underside, the tortoise hollowed and with a wide opening between the legs to allow for a cord to be strung under the body, the flat base with four seal characters in intaglio.

The seal may be read as Zhao Guang si yin (趙廣私印), which may be translated as “private seal of Zhao Guang.”

The owner of the seal may have been the second son of the famous General Zhao Yun (d. 229) of the Three Kingdoms period. According to The History of the Three Kingdoms (Sanguo zhi), Zhao Guang served as a General (Yamen jiang) for the Shu State in present day Sichuan Province and died in a battle on the northern frontier.

In ancient China, the choice of material and design for seals often was determined by the hierarchy of official ranks. Most Han dynasty seals were made of bronze, and the great majority had simple tab-loop knops. Seals made in silver or gold with tortoise-form knops such as the present example were reserved for use by high ranking civil and military officials, and private seals often were extended the same official status despite the omission of the rank title.

2.
A GILT-SILVER SEAL WITH TORTOISE KNOP