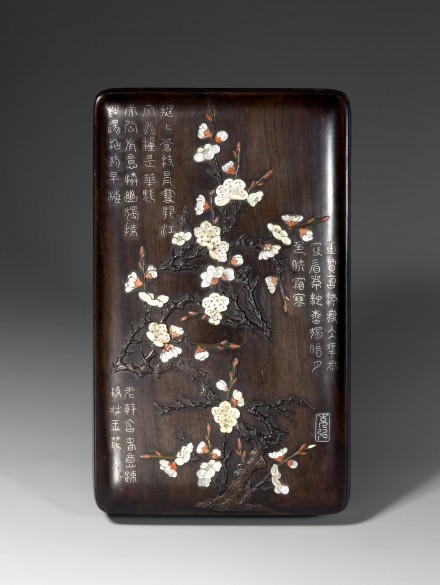 of rectangular cushion shape with rounded corners, the cover decorated with blossoming branches of prunus with gnarled bark carved from wood and bone stained dark brown bearing numerous white blossoms and tight buds of mother-of-pearl and coral, all finely carved in relief, framed by three poems written in seal script inlaid in silver wire and signed by the artist with a two character seal inlaid at one side: 克弘 (Kehong), the squared rim of the cover inlaid in silver wire with undulating wave scroll repeated on the squared rim of the box, fitted with an inner tray inlaid on the rim with wan characters in running fretwork.

The three poems on the cover may be transcribed as follows:

挺挺蒼枝冒雪開   Stiff and stubborn gray branches brave the snow
and bloom,
江南北糧是華魁   From South of the Yangzi to Mongolian Beiliang it’s
the premier blossom of all.
而問有意憐幽獨   But ask, are we inclined to pity such hidden solitude?
持遺陽枯致早梅   The deadlike branches hold remnants of yang,
thus to them early prunus blossoms arrive.

老幹含春意 Thoughts of spring inhere in the old trunk
疏枝吐玉花 For its sparse branches spew forth jade blossoms.

Sun Kehong (孫克弘 1533-1611), zi Yunzhi (允執), hao Xueju (雪居), was a native of Songjiang (part of present-day Shanghai) and the son of the Minister of Rites, Sun Cheng’en (孫承恩 1481-1561). During his lifetime Sun Kehong was highly regarded as a painter, calligrapher, and book collector. His skill as a maker of wood scholar’s articles particularly renowned for his wire-inlaid calligraphy is recorded by Wu Lüzhen (吳履震, active circa 1650) in 五茸志逸隨筆 Wurong shiyi suibi (Notes Gleaned from the Record of Marvels of Wurong): 孫雪居以紫檀仿古製 刻三雅杯銀絲填嵌漢篆字 which may be translated as “Sun Xueju used zitan to emulate ancient craftwork and once carved a ‘Three Elegances Cup’ with silver wire inlaid Han zhuan characters.”