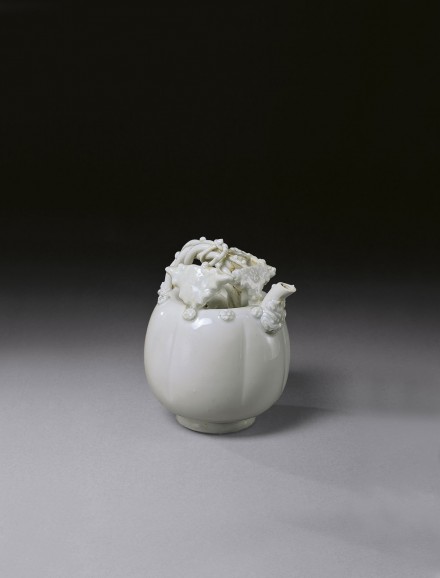 of bulbous form with steeply rounded sides divided into six shallow lobes and surmounted by an arching ropetwist handle rising from an applied monster mask to extend over the center of the ewer, the thick strands of the handle entwined with three smaller strands extending forward and out to the sides, each terminating in a moulded triangular foliate appliqué, the rounded shoulders of the vessel studded with small stylized florettes and the circular mouth in the center of the vessel partially covered with a moulded appliqué in the form of a frog, the short upward-curving spout also applied with a monster mask, all covered with a clear glaze stopping just short of the wide ring foot and continuing over the recessed base, the footrim left unglazed revealing the fine white porcelaneous body, with some kiln grit from firing at the edges of the foot.

Compare the white porcelain ewer of similar shape with the same twisted handle with three trefoil leaf-shaped terminals unearthed in 1981 from a Liao dynasty tomb at Haoqianyingzi, Qayouqian qi, Ulanqab Meng, Inner Mongolia, included in the travelling exhibition from China which was shown at several museums in Japan, illustrated in the catalogue Chugoku Naimōko-hoppō kiba minzoku bunbutsuten (Chinese Inner Mongolia Art of the Horsemen of the North), Tokyo, 1983, p. 75, no. 74. The same piece is illustrated in Zhongguo wenwu jinghua daquan: Taocijuan (Compendium of Chinese Archaeological Treasures: Ceramics), Hong Kong, 1993, p. 314, no. 499.

Another melon-shaped white porcelain ewer of less elaborate form is illustrated by Krahl in Chinese Ceramics from the Meiyintang Collection, Volume One, London, 1994, p. 197, no. 343, where the author cites another white porcelain ewer with similar stylized handle decorated with floral appliqués on the body excavated in 1972 from a Liao dynasty tomb in Nanlinzi, Liaoyang city, Liaoning province, illustrated in Wenwu, 1981, No. 8, pl. 7, no. 7.