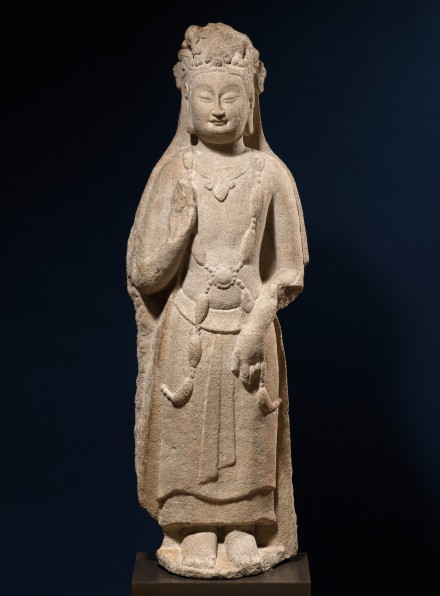 5.
A SANDSTONE STANDING FIGURE OF A BODHISATTVA

From the Buddhist Cave Temples at Tianlongshan
Northern Qi - Sui Dynasty, circa A.D. 580

carved in three-quarter relief facing forward with half-closed eyes and benevolent expression, the ears with long lobes, the hair dressed in a high topknot behind a jeweled diadem tied at the sides with fan-shaped bows and ornamental ribbons which hang down and fall across the shoulders and down the arms, the chest decorated with a pectoral collar centered by a trefoil and the body draped with a long necklace of pearls and large ovoid beads, centered with a pearl-edged roundel and ending just above the knees on both sides where the chains appear to turn up and continue onto the back, wearing plain robes gathered by a wide belt at the waist, the skirt with pleated folds at the front and ending in an undulating hem above the ankles which are concealed by the straight-hemmed underskirt, the bare feet resting on a simple platform remaining from a lotus-pod support, with the right hand, now fragmentary, raised up in front of the chest and the left hand held down at the front, the characteristic buff sandstone showing faint traces of original pigment, especially in the crown, raised on a fitted base veneered in patinated bronze.

From the Vérité Family Collection, Paris
Acquired by Pierre Vérité in Japan
Inherited by his son, Claude Vérité

5.
A SANDSTONE STANDING FIGURE OF A BODHISATTVA

From the Buddhist Cave Temples at Tianlongshan
Northern Qi - Sui Dynasty, circa A.D. 580