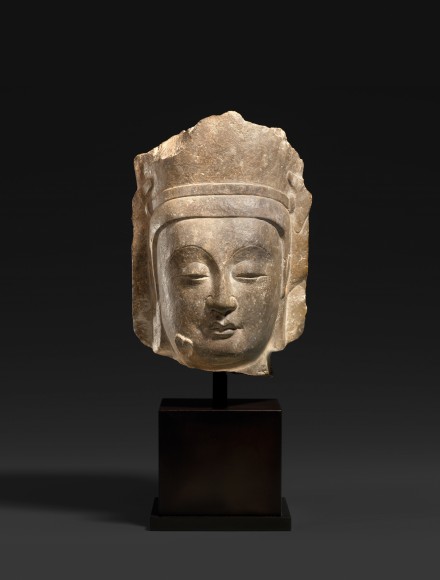 4.
A LIMESTONE HEAD OF A BODHISATTVA

the deity shown wearing a high diadem tied with a plain band knotted at the sides, with ribbons hanging down over the ears, the face very well carved with small features set in a serene contemplative expression, the eyes half-closed under arched brows delineated by incised lines rising from the bridge of the nose, the full lips slightly pursed, the skin smooth and showing no lines of age, but marked at one side of the chin where one finger of the bodhisattva originally was attached, the fine-grained gray limestone left slightly rough at the top of the head and on the back, now mounted on a pedestal base veneered in patinated bronze.

This head of a bodhisattva comes from a figure seated in siwei, the ‘pensive posture’. The mark at one side of the chin shows where the finger of the bodhisattva’s right hand originally touched the cheek. Bodhisattvas in the siwei position are shown seated with one leg crossed over the opposite knee, leaning forward with one elbow on the knee, resting one or two fingers on the cheek. Early sixth century inscriptions found at Dunhuang refer to this iconography. The identification of the specific bodhisattva remains uncertain, but figures shown in this posture are usually identified as the bodhisattva Maitreya, shown waiting in Tushita Heaven before his final reincarnation when he will descend as Prince Siddhārta, the Buddha Shakyamuni before his enlightenment.

Compare the two stone bodhisattva figures carved in siwei, the ‘pensive posture’ unearthed at the site of Longxing temple, in Qingzhou, Shandong province, in 1996, illustrated in the catalogue of the special exhibition Return of the Buddha: The Qingzhou Discoveries, London, 2002, pp. 156-157, no. 32, and fig. 80.

4.
A LIMESTONE HEAD OF A BODHISATTVA