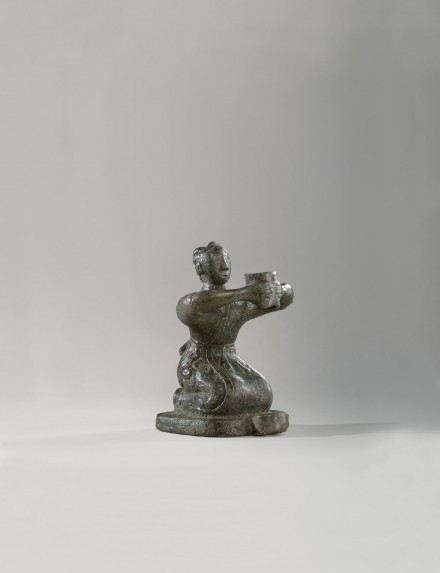 the attendant with arms held out high in front of his chest, presenting a short cylinder in both hands above a shallow circular socket protruding from the platform base, to receive the shaft of a candlestick or oil lamp, his face showing an alert and respectful expression, with wide-open almond-shaped eyes, broad nose and slit mouth, his hair pulled up into a bun on top of his head and partially covered by a close-fitting headdress tied with straps extending down in front of his jug ears and tied in a bow under his chin, wearing a long tunic cinched at the waist by a narrow belt tied in a knot, with a sheathed dagger cast in relief stuck through the belt and held tight against his back, and two short sashes tied with pendant discs hanging over his hips, his garment decorated with an allover pattern of hooked scrolls in intaglio, the soles of his bare feet shown surrounded by the bunched fabric of his undergarment at the back, the edge of the platform base decorated with entwined ‘ropetwist’, the smooth surface with attractively mottled gray and green patination all over.

Cast bronze figures made as lamp standards were a highly developed art form in China during the Warring States period and in the Han dynasty. Many examples have been found at various sites widely dispersed across China.

A group of bronze figures shown in the same kneeling posture and presenting a cup or socket with both hands, discovered at Jincun, near Luoyang, Henan province in the 1920’s, were published by W.C. White, Sometime Bishop of Henan, in Tombs of Old Lo-yang, Shanghai, 1934, plates LXXVI-LXXXII, nos. 201-205. The Jincun kneeling figures, all now in various museum collections including the Royal Ontario Museum, Toronto, The Museum of Fine Arts, Boston, The Fogg Art Museum at Harvard University, The Nelson-Atkins Museum of Art, Kansas City, and The Minneapolis Institute of Arts, were made in various sizes and, in addition to showing the same pose, they all share many distinctive features found in the present example, including the headdress tied with a strap under the chin, the close-fitting costume with crossed-over lapels and cinched at the waist, and the wide almond-shaped eyes. Trubner and other scholars have noted that the costume and facial features might indicate that these figures were depictions of foreigners from the steppes region north of China, but the small discs pendant from the belt on the present figure, probably jade pendants, show a Chinese fashion seen on Warring States period painted wood figures excavated in Henan and Hubei.

A closely related bronze kneeling figure cast in a style very similar to the present example, with intaglio scrolls on the robes, a sheathed dagger on his back, very similar facial features, and holding a socket above a matching cylinder at the front of the base was acquired by the Nelson-Atkins museum in 1932 and is illustrated in The Nelson-Atkins Museum of Art, A Handbook of the Collection, New York, 1993, p. 280.