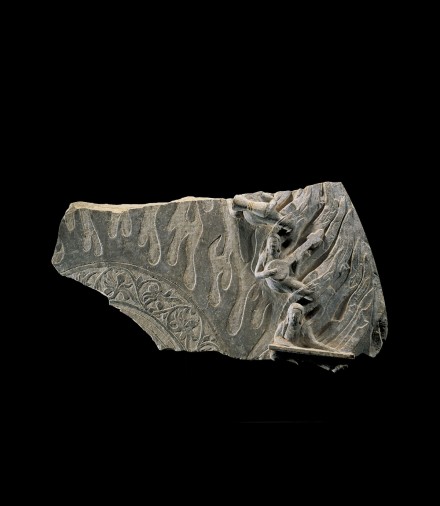 the heavenly musicians carved in high relief, shown floating effortlessly through the air making music in veneration of Buddha, with their lithe torsos gracefully curved and their feet kicked out behind, all dressed in high-waisted robes and draped in loose scarves and sashes which flutter and billow out behind them in a rhythmic pattern, completely filling the wide arc of the border, one apsara shown playing a guqin zither, another plucking a long-neck pipa lute, and a third fragmentary figure shown playing an hourglass-shaped taogu drum, the inner section of the stone finely carved in flat relief with an arc of foliate scroll and a wider band of stylized flame motifs from the nimbus around the head of the Buddha, the reverse and the outer edge of the thick slab polished flat, the fine gray stone showing traces of red and white pigment remaining in the recesses of the carving and with scattered earth encrustation from long burial.

Compare the three similar fragments of painted limestone mandorlas from Buddhist steles carved in a closely related style with apsaras wearing long robes and loose sashes which billow out to fill the border, all discovered in 1996 at the site of the ancient Longxing temple in Qingzhou, Shandong province, illustrated in Buddhist Sculptures: New Discoveries from Qingzhou, Shandong Province, Hong Kong, 2001, pp. 306-311, nos. 78-80.

Compare also the fragmentary limestone stele with very similar foliate scroll carved in flat relief bordering the nimbus behind the head of Buddha in the center of a Buddhist triad from the Longxing temple site, illustrated in the catalogue of the travelling exhibition entitled Return of the Buddha, London, 2002, no. 5, pp. 78-79, described as Eastern Wei period.

Another similar gray limestone stele fragment carved with two apsaras playing musical instruments, from the Simon Kwan Collection, was exhibited at the University of Hong Kong and illustrated in the catalogue entitled In the Footsteps of the Buddha: An Iconic Journey from India to China, Hong Kong, 1998, p. 303, no. 94.