The Gordon Collection:
Chinese Ceramics and Works of Art 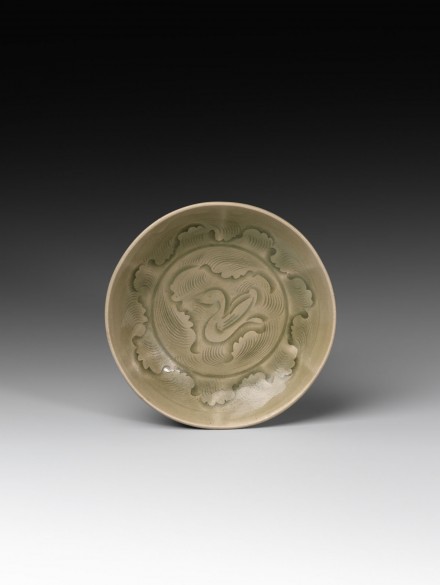 decorated on the interior with a swimming duck shown in profile amidst stylized waves filling the central medallion, the design deftly carved and combed, enclosed by a repeating band of similarly carved and combed wave motifs below a wide plain border, the underside of the gently rounded sides left undecorated except for an incised line border below the rim and six radiating indentations showing through as shallow ribs on the interior, dividing the sides into six lobes, all under a translucent olive-green glaze continuing over the recessed base, the flat edge of the sturdy ring foot left unglazed showing the gray stoneware.

A very similar carved Yaozhou celadon bowl of this pattern in the Victoria and Albert Museum London, from the Colthurst Bequest, is illustrated by Wirgin, Sung Ceramic Designs, B.M.F.E.A., No. 42, Stockholm, 1970, pl. 8f, and the same bowl is illustrated again by Ayers, Far Eastern Ceramics in the Victoria and Albert Museum, London, 1980, fig. 97.  Another similar example in the British Museum, from the Seligman Bequest, is illustrated by Vainker, Chinese Pottery and Porcelain from Prehistory to the Present, New York, 1991, pl. 83, p. 114, and the same bowl is illustrated again in The World’s Great Collections: Oriental Ceramics, Vol. 5, The British Museum, London, Tokyo, 1981, pl. 77, and by Gray, Early Chinese Pottery and Porcelain, London, 1952, pl. 71B.  Compare also the similarly carved Yaozhou celadon bowl in the Ashmolean Museum, Oxford, illustrated by Tregear, Song Ceramics, London, 1982, fig. 123, p. 105.