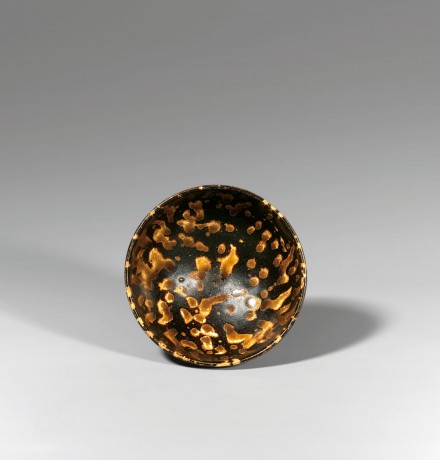 with steeply rounded sides covered inside and out with a lustrous dark brown glaze liberally splashed with caramel-yellow and reddish-brown markings, the upturned rim with some pale markings all around, the dark glaze continuing down to the edge of the very shallow ring foot, the base and footrim unglazed, revealing the buff pottery.

Compare also the larger Jizhou ‘tortoiseshell’-glazed bowl illustrated by Mowry in Hare’s Fur, Tortoiseshell, and Partridge Feathers: Chinese Brown- and Black-Glazed Ceramics, 400-1400, Cambridge, 1996, pp. 225-228, no. 87, with a lengthy caption including a detailed discussion of the various alternative techniques which scholars have proposed as the most likely method by which the ‘tortoiseshell’ glaze was created at the Jizhou kilns.