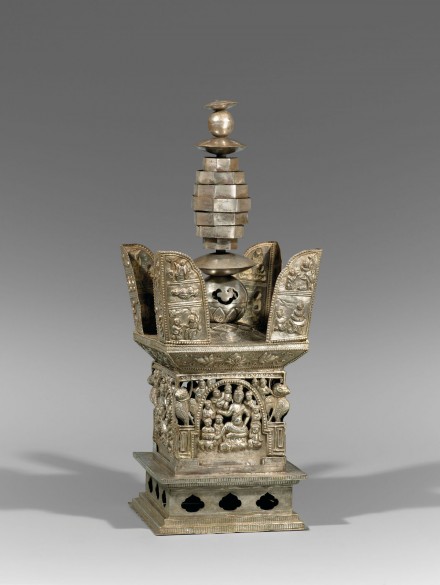 the square reliquary decorated with figural panels depicting famous scenes from jataka stories in relief and openwork, each panel framed by a beaded arch and flanked by guardian birds on rectangular pedestals at the corners, all surmounted by flaring panels decorated with exotic lotus in relief and supporting four angled leaf-shaped projections decorated in relief with scenes from the life of the Buddha, the domed top incised with undulating waves surrounding an open lotus blossom with overlapping petals radiating from a circular aperture for the tall central pillar rising from a pierced sphere and adorned with seven octagonal umbrellas, three discs and a small globe, the stepped pedestal base pierced with ruyi-shaped openings at the sides and supporting a central platform with a hollow ring of radiating petals to receive the sarira or relic to be enshrined, hidden within the stupa, the projecting upper border of the base incised with a lengthy dedicatory inscription.

From the Collection of J.T. Tai, acquired at Hartman Galleries, New York, 1975

The inscription may be read as:

which may be translated as:

The monk Congcheng, who expounds the Vimalakirti Sutra at the Weiguo Monastery on Zuo Avenue, and his mother Madame Zhao [commissioned] to be manufactured one silver reliquary stupa [in the form] of the Stupa of the Abundant Treasures Buddha (Prabhūtaratna), with the wish that:

Recorded on the twenty-fourth day of the eighth lunar-month in the third year of the Yongxi reign period of the Great Song dynasty (30 September 986), by Li Lingxun, maker of the stupa.

Compare the very similar repoussé openwork stupa made of copper with traces of gilding from the Nitta Collection, now in the collection of the National Palace Museum, Taipei, incised with a dedicatory inscription on the same register of the base dated to the second year of Tianyou, Tang dynasty (A.D. 905), illustrated by Chen in Lidai jintong fo zaoxiang tezhan tulu (A Special Exhibition of Recently Acquired Gilt-Bronze Buddhist Images), Taipei, 1996, pp. 50-55, no. 13, and on pp. 119-121.

A silver openwork stupa very similar to the present example, excavated in 2001 from the underground chamber of Leifeng Pagoda (built A.D. 972) in Hangzhou, Zhejiang province, is illustrated in Leifeng yizhen (Treasures from the Leifeng Pagoda), Beijing, 2002, pp. 130-158.

This distinctive form of square Buddhist reliquary is known as an Ashoka Stupa, called Ayuwangta (阿育王塔) in China. The name refers to an important early royal patron of Buddhism, the Indian King Ashoka (r. 272-231 B.C.) of the Maurya Dynasty who, according to legend, commissioned 84,000 monasteries and stupas for Buddhist scriptures and relics.

King Qian Hongchu (r. A.D. 948-978) of the Wuyue Kingdom, following the example of King Ashoka, commissioned 84,000 stupas of this form each inscribed with a dedication including a reign date corresponding to A.D. 955. A bronze example from that group in the collection of the Harvard University Art Museums is illustrated by Proser (ed.) in the catalogue of special exhibition, Pilgrimage and Buddhist Art, Asia Society, New York, 2010, p. 63, no. 18, where the author identifies the scenes depicted on four sides of the stupa as being “… from jataka tales featuring King Sibi offering his flesh, King Chandraprabha sacrificing his head, King Sudhira offering his eyes, and Prince Mahasattva sacrificing his body to the tigress and her cubs.” The same jataka scenes are depicted on the present example.

Another Ashoka stupa made of iron, bearing an inscription by Qian Hongchu dated to A.D. 965, unearthed in 1969 from the underground chamber of the Jingzhi temple Pagoda, Dingzhou, Hebei province, is illustrated in the catalogue of the travelling exhibition organized by the Idemitsu Museum of Arts, Chika kyūden no ihō: Chūgoku Kahoku-shō Teishū Hokusō tōki shutsudo bunbutsuten (Treasures from the Underground Palaces: Excavated Treasures from Northern Song Pagodas, Dingzhou, Hebei Province, China), Tokyo, 1997, no. 4.