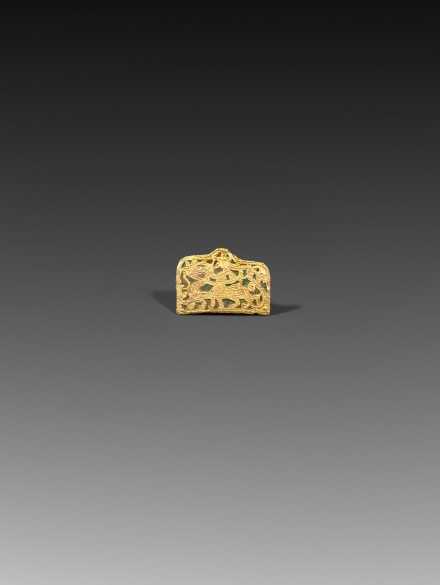 depicting a winged figure riding on a striding dragon surrounded by scroll motifs and enclosed within a linear frame of shield shape, the gold sheet embellished with rows and clusters of granulation throughout, laid over a thin bronze backing with two very small apertures for mounting at the margin on opposite sides.

A very similar gold ornament excavated in 1979 from a 4th century tomb in southern Jiangsu province, now in the Nanjing Museum, is illustrated by Watt in the catalogue of the special exhibition organized by the Metropolitan Museum of Art entitled China: Dawn of a Golden Age, 200-750 AD, New York, 2004, p. 111, no. 10, where the author refers to a pair of gold plaques of this form and design in the Musée Guimet, each attached to a bronze backing, illustrated by Delacour in De bronze, d’or et d’argent: Arts somptuaires de la Chine, Paris, 2001, pp. 245-247.

Compare the pair of small gold ornaments of this type in the Muwen Tang Collection, illustrated by Kwan in Chinese Gold Ornaments, Hong Kong, 2003, pp. 296-297, no. 151. Compare also the two similar small gold ornaments illustrated by Gyllensvärd and Scott in Kinesiskt Guld och Silver I Carl Kempe-Samlingen (Chinese Gold and Silver in the Carl Kempe Collection), Ulricehamn, 1999, p. 57, no. 17 and p. 59, no. 19.