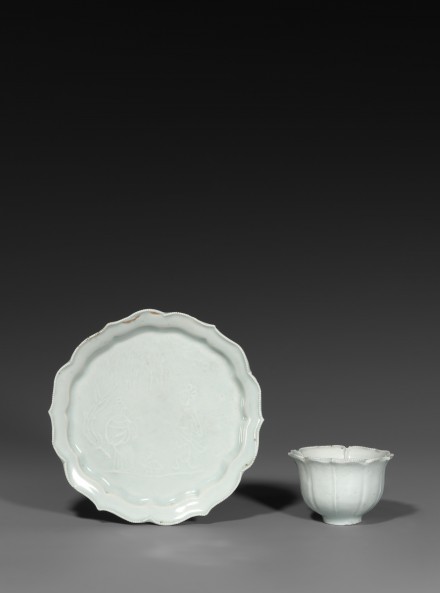 the cup with deep sides divided into five petal-lobes outlined on the interior with strings of ‘pearls’ which rise from a small appliqué prunus blossom in the center and continue around the shaped and flared mouth rim, the exterior with narrow ribs and grooves to define the petals, covered inside and out with a glaze of pale bluish tint and resting on a small ring foot; the shallow dish with narrow rounded sides rising to a flared rim divided into six petal-lobes and embellished with a thin string of ‘pearls’ along the lip, decorated on the interior with a scene of a scholar standing beneath a willow tree in conversation with a young woman holding a letter, all drawn in white slip under a matching pale bluish glaze, the flat base of the dish unglazed and the exposed porcelain fired to salmon-pink.

Qingbai porcelains of this very rare type, with appliqués, ‘pearl’ strings and underglaze slip decoration, were produced at Jingdezhen during a brief period of rapid technical and aesthetic development early in the 14th century, immediately before painting in underglaze-blue became the dominant style of porcelain decoration. For a detailed discussion of this group of wares see Medley, Yuan Porcelain and Stoneware, London, 1974, pp. 21-24. where the author illustrates a Qingbai flower-shape cup of related form in the Cleveland Museum of Art decorated in the same technique with an appliqué flower and strings of ‘pearls’ on the interior and around the petal-lobed rim, op. cit., pl. 8B. The same Qingbai cup is illustrated again by Cunningham et al., Masterworks of Asian Art, Cleveland, 1998, pp. 68-69.