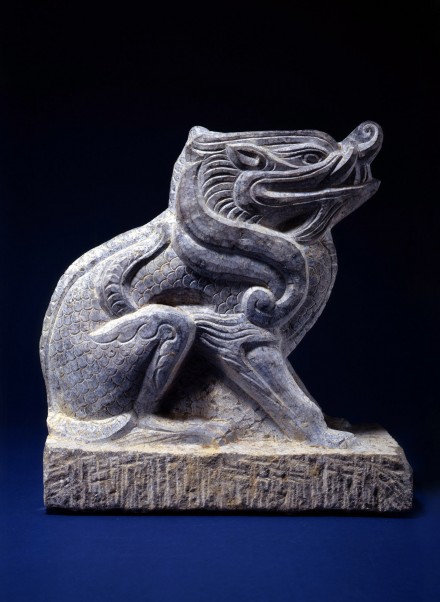 boldly carved in the round but flattened on both sides, the fantastic feline beast shown seated with clawed feet firmly set on an integral rectangular plinth, with eyes fixed in a steady gaze, the head with curled snout framed by long fangs and a short beard below the pointed chin, the body incised with scales all over and a thick mane swept back between a pair of wings rising from the shoulders, the arched back with a ridged backbone ending in a long segmented tail curled around one leg.

The lu duan (甪端) is a mythical beast with magical power, able to traverse mountains and seas, covering up to eighteen thousand li in one day, fluent in all foreign languages and able to distinguish between good and evil, thus serving to protect the emperor.

Compare the massive stone figure of a lu duan on the spirit road at the tomb of the Northern Song emperor Zhao Xu (d. 1085, reign name Shenzong) at Yong Yuling, similarly modeled with stylized wings on its shoulders, curled snout, long fangs and short beard, illustrated by Paludan, The Chinese Spirit Road, New Haven, 1991, p. 149, fig. 191 referred to by the author as a jiao duan, due to a misreading of the first character.