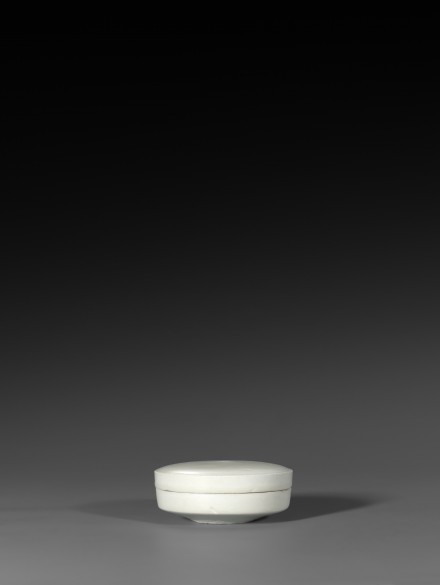 of circular form with straight narrow sides and slightly domed close-fitting cover, the underside angled in to a small wedge-shaped ring foot enclosing a recessed base, covered inside and out with white slip and a clear glaze with matte surface, the glaze ending in an uneven line around the foot, the foot and base and inner rims unglazed showing the white porcelain body.

A very similar Ding type white porcelain box is published by Sullivan, Chinese Ceramics, Bronzes and Jades in the Collection of Sir Alan and Lady Barlow, London, 1963, no. C. 211, illustrated as pl. 44a, with a detail of the base illustrated together with a fragment from the Ding kilns illustrated pl. 144d; and with caption including the exhibition history on pp. 54-55.

A similar Song white porcelain box and cover is illustrated by Krahl, Chinese Ceramics from the Meiyintang Collection, Volume Three (II), London, 2006, p. 435, no. 1433, where the author cites a similar box and cover discovered in 1985 in a group of Ding white porcelains in a tomb at Nanxinzhuang, Haidian district, Beijing municipality, attributed to the early Jin period (A.D. 1125-1160), illustrated in Treasures from a Swallow Garden: Inaugural Exhibit of the Arthur M. Sackler Museum of Art and Archaeology at Peking University, Beijing, 1992, no. 145.

Back to Exhibition Description Zoom