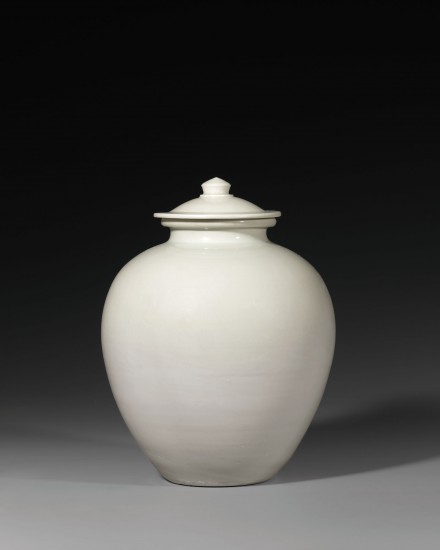 of well-potted ovoid form with steeply rounded shoulders and short concave neck, the wide mouth with rolled-out rim, the matching domed cover with flat brim and angular bud-form knop, covered with a clear glaze on the exterior, the underside unglazed, the jar covered inside and out with a lustrous clear glaze ending in a straight line just above the chamfered edge of the flat base revealing the fine white porcelaneous body, incised at the center of the base with the character 盈 ‘ying’ (abundant).

A very similar Xingyao white porcelain jar and cover, also with ‘ying’ mark incised on the unglazed base, now in the Hebei Lincheng County Institute of Cultural Relics Preservation, is illustrated by Zhao and Zhang (eds.) in Qiannian Xingyao (Xing Kiln in its Millennium), Beijing, 2007, p. 174. Compare also the Xingyao jar of similar form, lacking a cover, with ‘ying’ mark incised on the unglazed base, discovered in a Tang dynasty tomb near Xingtai city, Hebei province in 2004, now in the collection of Xingtai City Office for Management of Cultural Relics, illustrated by Zhang (ed.), Zhongguo chutu ciqi quanji (Complete Collection of Ceramic Art Unearthed in China), Vol. 3: Hebei, Beijing, 2008, p. 59, no. 59.

Research by Chinese scholars indicates that Tang dynasty white porcelains inscribed with the character ‘ying’ were produced exclusively for imperial use. Zhai and Wang discuss this rare category of porcelains in “White Porcelains with Chinese Character ‘Ying’ from the Qinglongsi Temple Site,” first published in Kaogu yu wenwu (Archaeology and Cultural Relics), Xi’an, 1997, No. 6, and included by Zhang (ed.), et. al., Xingyao yanjiu (Xing Kiln Research), Beijing, 2007, pp. 332-337, analyzing a group of ‘ying’-marked porcelains excavated in 1992 in Xi’an, Shaanxi province at the site of the Qinglong Buddhist temple which enjoyed imperial patronage during the Tang dynasty. The authors state that white porcelains reserved for imperial use were marked ‘ying’ for the Tang imperial treasury called “Da ying ku” which may be translated as “The Storeroom of Great Abundance.” The Da ying ku is mentioned in Tang historical texts as the largest and most important of all the palace storerooms during the Tang dynasty. The authors then conclude that ‘ying’-marked white porcelains discovered at the Qinglongsi site were most likely given to the temple as pious gifts from the emperor.

Zhi Guangzheng, in “Tang dai Xingyao gongci ‘ying’ zi yanjiu” (A Study of Tang Dynasty Xing Ware Tribute Porcelains Marked with the Character ‘Ying’), first published in Wenwu Chunqiu (Cultural Relics Age), 2006, No. 5, and included by Zhang, op. cit., pp. 474-480, states that the white porcelains from the Xing kilns in Hebei province first became imperial tribute wares in the Tianbo era (A.D. 742-756) and continued to be used as imperial tribute ware through the end of the Tang dynasty.