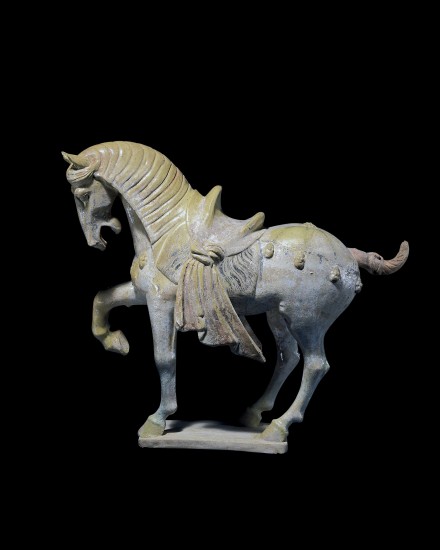 6.
A GLAZED AND PAINTED POTTERY FIGURE OF A PRANCING HORSE

well modelled in a vigorous posture with right foreleg raised and neck gracefully arched to show the long ﬂowing mane, with head tucked in and turned slightly to one side and mouth wide open, the nostrils ﬂared and the long forelock swept back around the pricked ears, the saddle resting on a tiger-striped saddle blanket and draped with a knotted cloth ﬂaring back on either side, the trappings on the chest and hindquarters decorated with elaborate pendant tassels, the buff pottery covered with a straw-colored glaze attractively degraded to silvery iridescence in many areas, and with extensive original painted decoration still remaining.

Exhibited at the China Institute and illustrated by Harrist in the catalogue entitled Power and Virtue: The Horse in Chinese Art, New York, 1997, p. 69, no. 8.

Compare the straw-glazed prancing horse of similar model but without the tassels, saddle and saddle blanket, excavated in 1972 from the tomb of Zhang Shigui at Liquan, Shaanxi, province, included in the 1987 exhibition at the Los Angeles County Museum of Art, illustrated in the catalogue, The Quest for Eternity: Chinese Ceramic Sculpture from the People’s Republic of China, Los Angeles, 1987, in color on p. 55, and p. 129, no. 60. This type of horse with one foreleg raised is thought to be modelled after dancing horses which were kept for entertainment at the Tang court during the emperor Xuanzong’s reign (A.D. 712–756). According to the Minghuang zalu (Miscellaneous records of Emperor Minghuang), emperor Xuanzong kept four hundred horses which were specially trained to dance to music. These special breeds of horses from Ferghana and other regions of Central Asia were one of the most sought-after luxuries imported into China on the ‘Silk Road’ during the Sui and early Tang periods and, as emblems of power and wealth, models of these famous horses such as this example, were an essential part of the furnishing of any important tomb.

6.
A GLAZED AND PAINTED POTTERY FIGURE OF A PRANCING HORSE