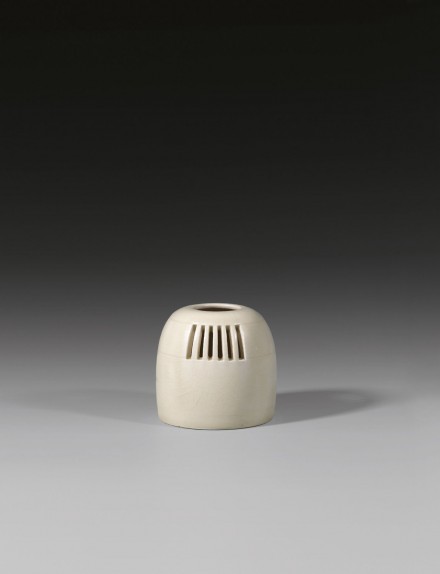 of beehive shape, pierced with three clusters of six vertical slots very neatly cut and symmetrically arranged high on the plain steep sides between lightly incised line borders, the domed top with a rimless circular aperture in the center encircled by another lightly incised line border, the pure white stoneware covered with a transparent glaze, pooling at the lower edges of the pierced slots and around the outer rim of the base to a glassy pale greenish tone and showing some light crazing throughout, the smooth flat base unglazed.

Another pottery tomb figure of a female attendant holding a censer of similar form, discovered near Sha Chang, Yube, Anyang in the tomb of Zhang Sheng, dated to A.D. 595 is illustrated by Tregear (ed.), Arts of China, Neolithic Cultures to the Tang Dynasty—Recent Discoveries, Tokyo, 1968, p. 184, fig. 352.