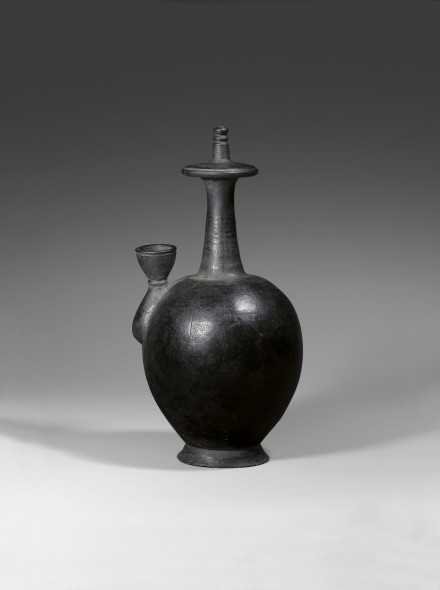 following a metal shape, the well potted ovoid body resting on a high hollow splayed ring foot and applied on the shoulder with a bulbous spout rising to an upright cup-shaped mouth, the tall slender neck of the vessel interrupted by a wide disc-shaped flange with stepped edge below the narrow tapered nozzle with raised ribs below the mouth, the high-fired black pottery body with glossy burnished surface showing the effect of burial in some areas and with remains of encrusted earth.

A white-glazed kundika of very similar form from the Niigata BSN Bijutsukan is illustrated by Watson in Tang and Liao Ceramics, London, 1984, pl. 141, where the author translates the Sanskrit name of this vessel shape ‘kundika’ as ‘pure-water bottle’, derived from the use of these vessels for hand-washing in Buddhist rituals.

Bo Gyllensvärd, in his comprehensive study entitled “T’ang Gold and Silver,” B.M.F.E.A., Bulletin no. 29, Stockholm, 1957, p. 75 discusses the origin of this form as the water bottle of the Buddhist monk, described as a novelty by the Chinese pilgrim Yi Jing when he saw it in India in A.D. 671. A Chinese bronze kundika and a pottery example are illustrated by Gyllensvärd in fig. 36, together with the Central Asian and Indian prototypes and a drawing showing their usage.

A Tang dynasty bronze kundika from the collection of Emperor Shōmu, donated to the Shōsō-in storehouse of Tōdai-ji Temple in Nara by the emperor’s wife after his death in A.D. 756, is illustrated by Hayashi in The Silk Road and the Shōsō-in, English Edition, New York, 1975, p. 158, no. 184.