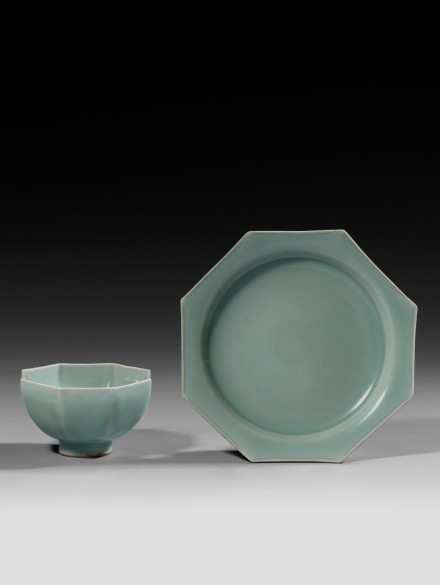 the dish with gently rounded short flaring sides rising from a wide circular recess to a crisply cut flat rim divided into eight equal lobes, the base flat with an unglazed medallion at the center, the matching bowl with deep flaring sides rising from a small ring foot to a wide lipless rim, both covered with a well matched bluish-green glaze of even tone draining thin at the rims to allow the pearl gray stoneware to show through, the unglazed central medallion on the base of the dish and the unglazed edge of the foot of the bowl burnt reddish brown in the firing.

A Longquan celadon bowl of this form in the collection of the Shanghai Museum is illustrated in Longquan yao yanjiu, (The Research of Longquan Kiln), Beijing, 2011, p. 53, pl. 5.

Compare also the Geyao bowl of octagonal form published in the Illustrated Catalogue of Sung Dynasty Porcelain in the National Palace Museum: Lung-ch’üan Ware, Ko Ware and Other Wares, Taipei, 1974, no. 57.

A silver bowl of very similar octagonal form discovered in a Southern Song dynasty cache in Pengzhou, Sichuan province is illustrated in Song Yun: Sichuan jiaocang wenwu jicui (The Charm of Song: Cultural Artifacts from Hoards in Sichuan), Beijing, 2006, p. 118, where it is noted by the author that silverware in octagonal form was a new development in the Southern Song dynasty.

A gold octagonal dish and matching bowl from the tomb of the Southern Song official Zhu Xiyan (1135-1200) and his wife in Xiuning, Anhui province is illustrated by Yang in an essay for the special exhibition organized by the Zhejiang Provincial Museum, Zhong xing ji sheng: Nan Song feng wu guanzhi (Achievements of Southern Song Dynasty), Beijing, 2015, p. 16, pl. 10. Another octagonal dish with matching bowl, made of parcel-gilt silver, discovered in a Southern Song cache at Taining, Fujian province, is illustrated by Yang in the same essay, op. cit., p. 27, pl. 52.