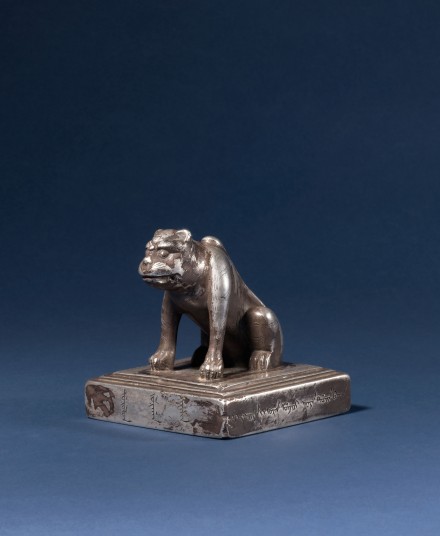 Provenance
Japanese Private Collection, acquired near Kyoto from a small institution which had received it as a donation from a professor at a Japanese university

The Ming dynasty was conquered by the Manchus leading an alliance of tribal armies including Mongol clans incorporated into the Manchu banner system. After the conquest was accomplished, the Manchus established the Qing dynasty, took over the government and adopted Chinese bureaucratic systems to rule from the capital in Beijing. The Manchu emperor Kangxi consolidated the rule of the Qing dynasty over Inner Mongolia by granting the rank of Zhasake (prince) to the clan leader of each Mongol banner. The Zhasake was given ownership rights to all the land, resources and people in the banner territory and the title was hereditary within the clan. This Chinese silver seal was an essential symbol of the rank and power granted by the Kangxi emperor to the Zhasake of the Sizi (Four Sons) clan.

The Sizi (Four Sons) clan was founded by a grandson of one of Genghis Khan’s three full brothers, Khabutu Khasar. The Sizi clan was first granted the title of Zhasake in 1636 and continued to rule the territory assigned to them in Inner Mongolia through thirteen generations, until 1949.

A very similar silver ‘tiger’ seal cast with the name Youyizhongqi Zhasake, inscribed with the same Kangxi date and with the same declaration: “Issued by the Imperial Ministry of Rites” in Manchu and Mongolian, is illustrated in Genghis Khan: The Ancient Nomadic Culture of the Northern China, Beijing, 2004, pp. 336-337, and described as collected from the Palace of Beile at Youyizhong Banner, Ordos City.

Another very similar silver ‘tiger’ seal is illustrated in the Catalogue of the International Exhibition of Chinese Art, London, Royal Academy of Arts, 1935-6, p. 265, no. 2953, described as “Used by Governors of Provinces during the Ch’ing Dynasty” and “Lent by the Government of the Soviet Union.”