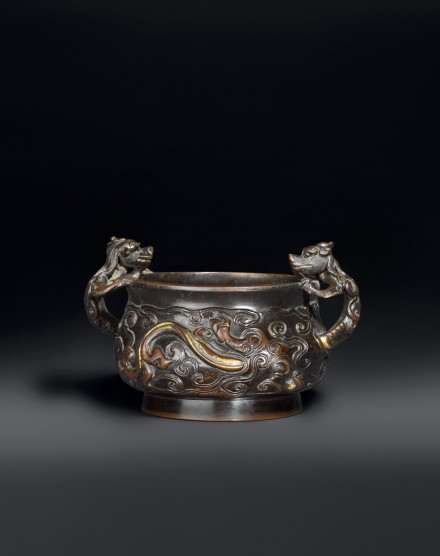 heavily cast with a pair of chilong winding in and out of stylized swirling clouds, with splashes of gilding on the dragons’ backs, the dragons emerging and rising up to grasp the rim on opposite sides, the recessed base with a six character imperial reign mark in kaishu reading Da Ming Xuande nianzhi (Made in the Xuande period of the Great Ming dynasty).

A very similar incense burner, also cast with a Xuande imperial reign mark, is illustrated by Tsang and Moss in Arts from the Scholar’s Studio, Hong Kong, 1986, p. 164, no. 139, where the authors discuss the close resemblance of the design to lacquer wares of the early fifteenth century and suggest that despite the unresolved questions surrounding the correct dating of more common types of Xuande-marked censers following archaic bronze or Song ceramic traditions, there seems no reason to question the authenticity of a Xuande (1426-1435) dating for this particular form and design.