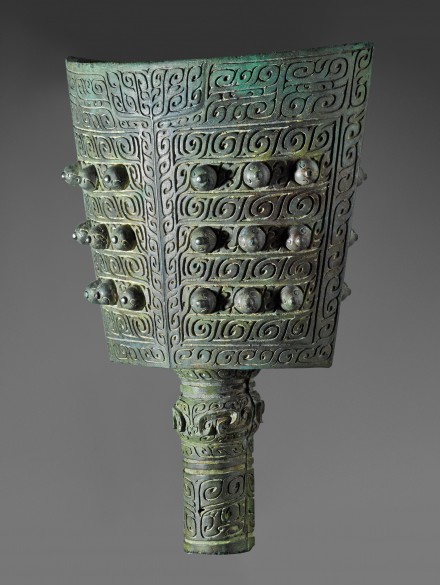 the clapperless bell of pointed oval section, heavily cast on each wide barrel-rounded side with eighteen nipple-bosses surrounded by deep swirling intaglio scroll pattern, the looped and spurred scrolls arranged in paired horizontal rows forming two wing-shaped panels on each side, framed by narrow borders of similar intaglio scroll motifs running along the margins and up the center ridge-line, and with very similar paired scroll motifs in a horizontal band of double width below the mouth, centered by a slightly raised panel echoing the form of the bell filled with matching intaglio scroll motifs vertically arranged, the flat underside of the bell also cast with matching deep intaglio scroll pattern, raised on a tall tubular shank with a high rounded collar cast with interlocking pairs of horizontal ‘C’-scrolls in sharp relief on a ground of intaglio scrolls, the lower half of the shank with paired intaglio scrolls in two tiers and pierced with two small apertures to receive pegs for securing a wooden shaft, the interior of the bell plain except for twin thread relief bands below the shallow arc of the chamfered rim, with an opening to the hollow shank at the center of the base, the surface very well preserved, with smooth olive green patination showing some widely scattered brighter green mottling.

A nao cast with very similar decoration discovered at Changxing county in Zhejiang province is illustrated in Wenwu, 1960, No. 7, p. 49. The same nao was exhibited in Japan at the Tochīgi Prefectural Museum in 1992 and published in the catalogue entitled Chūgoku Setsukō sei bumbutsu-ten (Exhibition of Cultural Relics from Zhejiang Province), Tochigi, 1992, p. 60, no. 21. Another nao of very similar form and similarly decorated, unearthed in 1975 at Jinshi, Xiangxiang, Hunan province and now in the Hunan Provincial Museum was exhibited at the China Institute Gallery, New York and illustrated in the exhibition catalogue by Chang (ed.), Along the Yangzi River, Regional Culture of the Bronze Age from Hunan, New York, 2011, p. 59, no. 24. Compare also the nao of very closely related form and design which was discovered at a tea plantation on Huangke Mountain, Yangze village, Jianou county, Fujian province in 1978, illustrated in Wenwu, 1980, No. 11, pl. 8:1, with a description and report on p. 95; and the very large nao of closely related form cast with very similar decoration in the Miho Museum, illustrated in the Catalogue of the Miho Museum (The South Wing), Shigaraki, 1997, pp. 170–171, no. 79. Another similar nao from the Uldry collection and now in the Museum Rietberg, is illustrated by Epprecht, et. al., in Museum Rietberg, Zürich, Zurich, 2002, pp. 48–49.

For a survey of nao with a proposed classification based on their ornament, see Gao Zhixi, “Zhongguo nanfang chutu Shang Zhou tong nao gai lun” (An Introduction to Shang and Zhou Bronze Nao Excavated in South China), presented at the International Conference on Shang Civilization, East-West Center, Honolulu, 1982, published in Hunan kaogu jikan 2, 1984, pp. 128–35 and published in an English translation in Chang (ed.) Studies of Shang Archaeology. Selected Papers from the International Conference on Shang Civilization, New Haven, 1986, pp. 275–299.