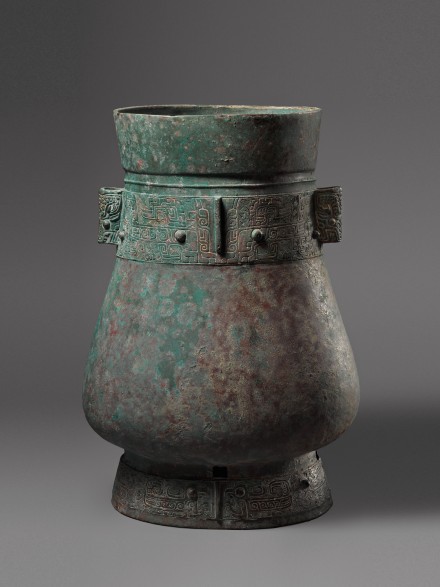 of wide pear shape and oval section, decorated with a raised frieze filled with two taotie, each formed by a pair of kui dragons with large horns and long curled tails cast in flat relief on a ground of fine spiral scroll, their bulging rounded eyes confronted on a central flange and their open jaws combined to make the mouth of the taotie, and with small birds with raised eyes at either side under the dragons’ tails and flanking two lug handles cast in relief with monster heads with open jaws and prominent eyes under curved ram’s horns, all beneath a raised ‘bowstring’ band, the upper neck stepped out and flaring slightly to a wide mouth, the plain rounded body of the vessel raised on a high hollow foot with slightly splayed sides decorated with long-tailed birds with hooked beaks, curled crests and raised claws, lined up in pairs confronted on two flanges below four rectangular apertures evenly spaced around the top of the foot, aligned with the flanges and lug handles, the surface with brightly mottled green malachite and reddish cuprite corrosion.

Compare also the hu of very similar form decorated with taotie and kui dragons in the same style, illustrated in the Catalogue of the Special Exhibition of Shang and Chou Dynasty Bronze Wine Vessels, National Palace Museum, Taipei, 1989, p. 111, pl. 25, from the Imperial Collection.